Exclusive Q&A: Guillermo del Toro On The Ghosts And Grandeur of CRIMSON PEAK

An archive interview from The Gingold Files. 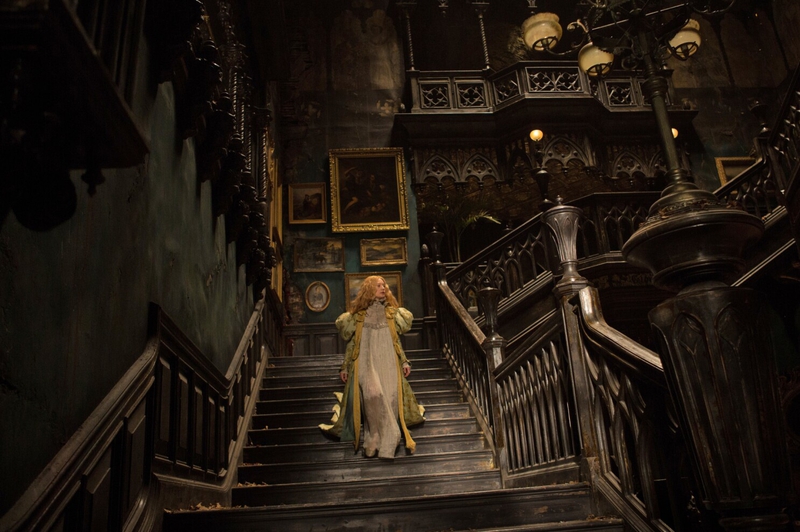 Editor's Note: This was originally published for FANGORIA on October 15, 2015, and we're proud to share it as part of The Gingold Files.

In Crimson Peak (reviewed here), Guillermo del Toro revisits the haunting themes of his past Spanish-language chillers on a grand Hollywood scale. FANGORIA sat down for an exclusive chat with the filmmaker to talk about the film’s visuals and its characters, living and dead.

Crimson Peak (scripted by del Toro and Matthew Robbins) stars Mia Wasikowska as Edith Cushing, a young aspiring writer in turn-of-the-century Buffalo, NY who is spirited to a crumbling, remote British mansion by the dashing Thomas Sharpe (Tom Hiddleston). Within this opulently eerie setting, she begins to discover dark secrets about Thomas and his antagonistic sister Lucille (Jessica Chastain), while the place’s spectral inhabitants (performed by del Toro regular Doug Jones and [REC]’s Javier Botet) try to warn her of the danger…

Crimson Peak is one of the most beautiful-looking horror films ever made. Is it difficult to create an aura of fear in the midst of such gorgeous surroundings?

Well, the idea of the Gothic romance is that it’s about the clash between beauty and horror. It’s its own genre, a mixture of this almost dark-fairy-tale-enchantment atmosphere that is creepy, though not necessarily scare-driven, and a little overwrought, heightened melodrama. I love that flavor.

It is, and I wanted to push the violent moments and the sexual moments, because in the 19th century, when horror and Gothic-romance literature was at its peak, those elements were heightened for the time. They were very titillating, you know? So I wanted to update that, and the gender politics, a little bit.

The expansive sets in Crimson Peak are incredibly striking. Was there ever a point where anyone involved in the production suggested you create the environments with greenscreen?

Yeah, but I said no. I’m a big proponent of the physical aspect of moviemaking. I love to use makeup effects to create the ghosts and then enhance them digitally. The ghosts were there; it was Javier Botet and Doug Jones, and they were there for the actors to react to. In the same way, the house was there for the actors to inhabit. Curiously enough, the house and the wardrobe that are so striking are also storytelling tools. They tell you who these people are; you understand those two people more when you see where they lived as kids.

It was cool to see that you had both Jones and Botet as the ghosts.

Yeah; Doug plays the mothers and Javier plays the other spirits. It was great to have them, because they have different performance styles. Javier is very twitchy and spastic and almost sort of plays a death rattle, and Doug is very fluid and spectral. I didn’t want the same performer for all the ghosts, because there would be a point where you’d say, “Those are the same guys.” So we took the approach of breaking them down between those two actors.

Botet has a lot of experience playing female ghosts and other horrific characters, in films like Mama and [REC]; what makes him so good at those roles?

Well, what’s great about Javier is that next to him, Doug Jones is like John Candy! Javier is super-thin, and not only that, he can dislocate his arms, so there’s a shot in the movie where a ghost does that in the far silhouette from the bathroom. That movement is very disturbing.

How did the main cast come together? Did you have these actors in mind, or was it a matter of auditioning to find the right people?

Well, when I wrote the movie, I had Jim Beaver in mind for the father, and I had Burn Gorman in mind for Holly, the detective. I was thinking of Joan Crawford when I was writing Lucille, and when we went out to cast, I was very happy that Jessica wanted to do it, because I felt she could bring intelligence and humanity to that part. When Tom came on board, I tried to rewrite the character more toward his strength, which is that he has this innate vulnerability. And then Mia came on board, and she has such a core of strength, and she’s a perfect period heroine yet very modern at the same time.

Had you seen her in her previous Gothic/fantasy films, and in Stoker?

I’ve seen everything she’s done, and I love the range she has. When we met, I said to her, “The great love story Edith has is that she learns about the darkness of this person, and she still loves him.” But more importantly, she learns to love herself, you know? She was all for that, and I think she’s incredibly intelligent and intuitive.

Edith is also a creative person, an aspiring writer; is there anything autobiographical about her?

Well, she has the innocence of somebody that young, especially in that period when women were not published as often as men, and were rejected on the basis of being female writers. That makes Edith marginal in a way I could understand, because as a Mexican director, I came into the filmmaking arena when nobody would have believed that a Latin director could do big-budget sci-fi or complex horror. I identified with that.

Early on, Edith says of her book, “It’s not a ghost story, it’s a story with ghosts in it”…

Same with the movie!

That might surprise certain people, because some of the promotion for Crimson Peak has defined it as a ghost movie, when the supernatural is really secondary in the story.

That’s true. It’s very hard for me to control or predict the marketing, and this particularly is a very cagey genre, you know? So I’m glad you noticed that, and I think that the ghosts are not necessarily the scariest thing in the movie. The most frightening stuff comes from the humans, and the ghosts are developed almost as characters.

Your last two horror films, Mama and this one, are very concerned with motherhood, albeit in extremely different ways…

Yeah, and the funny thing is, so is Don’t Be Afraid of the Dark, so are Pan’s Labyrinth and Cronos; almost all of my stories have to do with parents and children. I find myself thinking about those things, you know? Pacific Rim, with Mako Mori and and Pentecost, the Australian father and son… I don’t know why, but I like those ideas.

Is there anything in your family background that might have inspired that?

Oh yeah; look, we’re all bent to the side we were bent when we were kids, you know? I think you try to gather the pieces that broke in your first 10 years, and spend the rest of your life trying to put yourself back together. No matter how happy your childhood was, if you’re a neurotic artist, you certainly must have been broken at some time in your childhood [laughs].

How did you assemble your team of cinematographer, production designer and costume designer for Crimson Peak?

The cinematographer is Dan Laustsen, who I worked with on Mimic. We got along fabulously on that. Mimic was, curiously enough, a very happy set; it was a very unhappy creative experience, but everybody got along and had fun during the shoot, and I always thought Dan’s lighting on Mimic was superb. For the production design, I liked Tom Sanders very much on our first meeting, and I thought he did a phenomenal job on Saving Private Ryan; he brought a reality to it, and incorporated the characters and their stories into the design. With Kate Hawley, who did the costumes, I prepared the two Hobbits with her when I was going to direct those, and I had done Pacific Rim with her, so I knew how detail-oriented she was, and I thought this was perfect for her. It became our obsession to make the costumes as perfect as possible, and the same with the sets.

I found it interesting that you chose to reveal early on that Thomas Sharpe is up to no good, instead of keeping that fact hidden. What was your thinking behind that decision?

We tried many little variations on that, and I honestly thought that the most interesting one was to keep the audience ahead of Edith; they needed to know before she did. I was happy with that approach, because the extent to which Thomas is evil or Lucille is evil, and the exact way they are, is revealed later. So it’s not the what, it’s the how.

It relates to Alfred Hitchcock’s definition of suspense vs. surprise, and to his Vertigo, where knowing more than James Stewart’s character does adds an extra dimension to the story.

Well, when you reveal things like that, I actually think it gives you a better chance to develop the psychological portrait of a character. You can see his or her contradictions more easily, and then you’re more prepared to accept their humanity. Even if they are horrible human beings, you can kind of feel sorry for them.

And Thomas, as duplicitous as he is, becomes more sympathetic toward the end.

I think Lucille is too, in a way, because at the end of the day, the real monster is that family. The real monsters are the mother in that portrait, and the absent father, and the legacy they put on Thomas and Lucille. When you hear the stories about their childhood, they’re horrible!