GorePlay: Inside The Eerie World Of Low-Res Horror Gaming 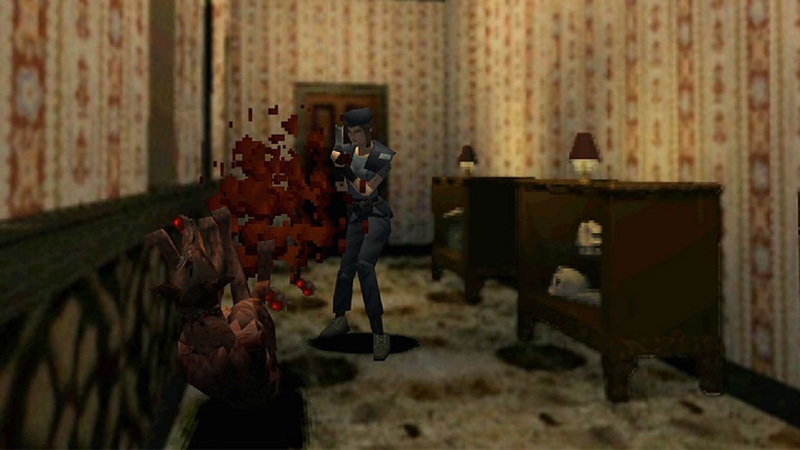 That shouldn’t be surprising. The evolution of gaming has always been driven by such technological advances. Each generation of hardware is more powerful than the last and can use smaller polygons in larger numbers to create more detailed visuals. There are obvious parallels here with movies, which have likewise evolved from silent black and white films shot on soundstages to 4K HDR movies with lavish CGI sets. It’s a familiar modern trajectory and one that assumes brighter, shinier, more, more, more is the true metric of creative progress.

Also familiar is the outsider urge to swim against that tide and reclaim the less polished tone, feel and aesthetics of the past. Just as Tarantino and Rodriguez’s Grindhouse inspired a flood of self-consciously grungy faux-exploitation films, shot with modern methods then given an artificial layer of 1970s-era Times Square crackle and hiss to sell the illusion, so too is horror gaming having its own retro moment right now, with a growing community of independent and homebrew developers co-opting the style of mid-90s games to put their own unique spin on the medium.

This scene has yet to gain a single catch-all name, but phrases like low-rez or low-poly are common signifiers, referring to the choice to purposefully work with lower resolution and polygon counts than the current standard. Most take the chunky graphics of Sony’s original PlayStation, released in 1995, as the guiding inspiration. Little wonder, given how instrumental that console was in revitalizing horror games with the likes of Resident Evil, Silent Hill and Clock Tower. 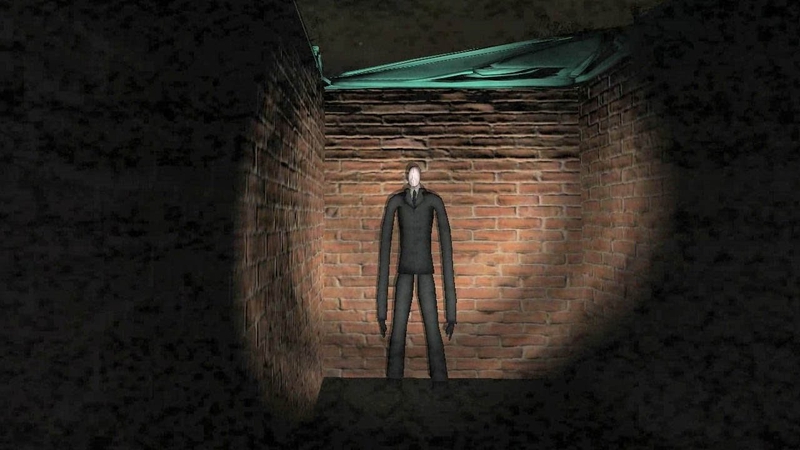 The original freeware Slender: The Eight Pages from 2012 was an early example of this movement towards sinister minimalism, with its retro design and simple mechanics. Now communities have sprung up with names like DreadXP and HauntedPS1, as like-minded creators are drawn together and put out their work under these shared banners. The games they create are often small and intimate, often taking no more than thirty minutes to play, offering eerie places to explore and mood pieces to absorb rather than the directed action of traditional games that can be “won”. They’re usually uploaded for free on sites such as Itch.io, or compiled into online “demo discs” containing multiple games.

Low-poly games are, by their nature, often deliberately surreal. The word “surreal” has increasingly been used as shorthand for “a bit weird” but these games embody the word in its literal sense: dreamlike and uncanny. Missed Connection, for example, simply tells you “It's 1999 and you've just found Craigslist. Explore a dying mall to find a missed connection” and with nothing more to go on you’re dropped into an eerie location and are left to roam the cavernous hallways of millennial capitalism, until you discover that your date is not what they seem. Bathed in sickly greens and blues, the familiar branded storefronts are clearly just jpg photos that warp and distort as you move around them. 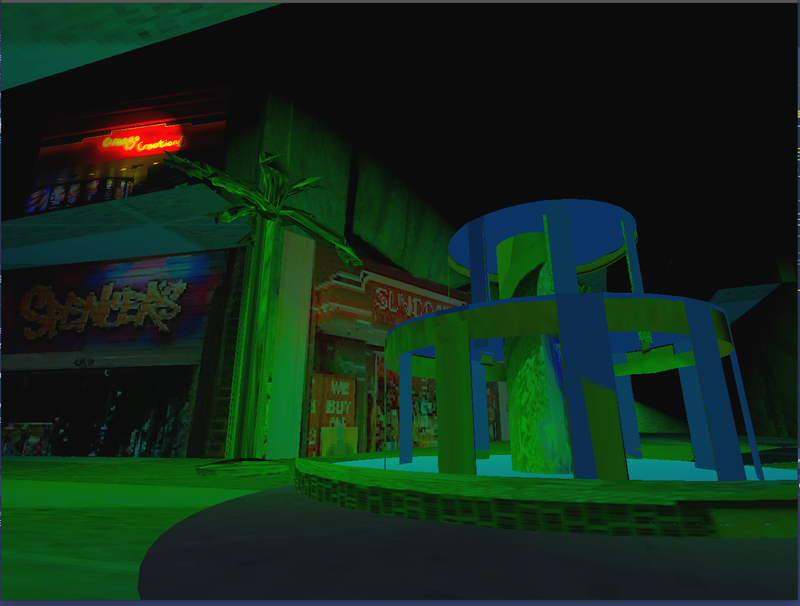 A glitch in the software? Maybe. These games are rough around the edges, partly as a stylistic choice but also because of their punk rock zine production methods. You’re never quite sure if the disturbing geometries and fragmented realities are meant to happen, and that cognitive gap is where this sort of game thrives. “Early 3D games seemed mysterious and full of potential,” says VaporShark, Missed Connection’s solo developer. “I think it's interesting that I don't have any of the same emotions towards the 2D games that I played at an even earlier age. Early 3D had an uncanniness that was both exciting and scary, almost like the games were falling apart at the seams and weren't really supposed to exist.”

Other low-poly games tackle current issues head-on. Agony of a Dying MMO by Salem Hughes takes place inside an online role-playing game in the final hours before it shuts down after the developers introduced a Nazi faction to the game and sent the community into a toxic death spiral. Bleakshore by Breogán Hackett casts you as a young woman in a washed-out misty landscape searching for her missing girlfriend but is about something far more personal. “I try to think of a situation I'd personally find scary”, says Breogán, an indie developer from Ireland who started the HauntedPS1 community on Discord in 2018. “Bleakshore is based on a lot of my fears and worries as a trans woman, which is why it becomes almost more like an anxiety game than a horror game.” 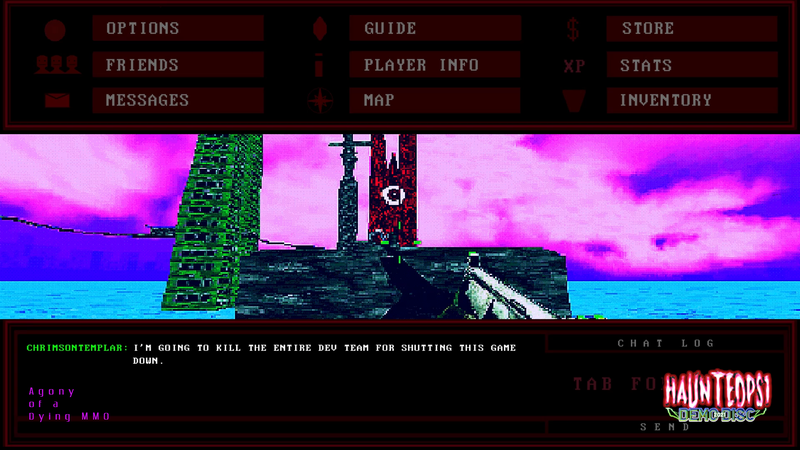 Although there are plenty of low-poly horror games that are simply strange for the fun of it, this is a retro scene with very little irony. Whereas modern riffs on grindhouse movies arrived winking at the audience, wearing their artificial film grain as an affectation, these minimalist horror games take the visuals of the past but are utterly earnest. Nostalgia is a factor in their creation, but most in the scene were too young to fully experience the likes of Silent Hill and Resident Evil the first time around and are reliving something deeper than just comfortably familiar sights and sounds.

“If I'm being perfectly honest my only memories of actually playing PlayStation 1 titles are at a cousin's house when I was a kid, and later when me and my brothers briefly owned a half-broken PS1 with a bunch of games in the mid-2000s,” says Breogán. After starting the group to support other solo developers, the shift towards 1990s visuals and horror themes emerged organically. “I had become more consciously aware of the unique visual style and limitations of the PS1 and felt like it was a good touchstone for introducing people to the low-rez 3D style me and others were working in,” she says. “Really the nostalgia is just a hook to get people thinking outside the box of modern 3D graphics.”

Similar stories come from other developers in the scene, driven largely by memories of playing or seeing creepy games during early childhood in the 1990s, and the strange desire to recapture the feelings they evoked, rather than just riffing on the technical specifics.

“As a child, I was afraid of almost everything to an almost debilitating degree”, says Aidan Cushing, who manages communications for the HauntedPS1 community and develops under the name Rabbit Run Games. “As a result of my near-crippling anxieties I was allowed absolutely nowhere near horror games at the time. Out of a morbid sense of curiosity, I lifted my dad’s copy of Sanitarium, an early PC point and click horror game, and while I regretted it almost immediately, I could not seem to put it down. The esoteric format of puzzle games at the time led me to wander the seemingly nonsensical halls of the hospital for hours, an experience which largely inspired the design of my current project, The Drowning Machine.” 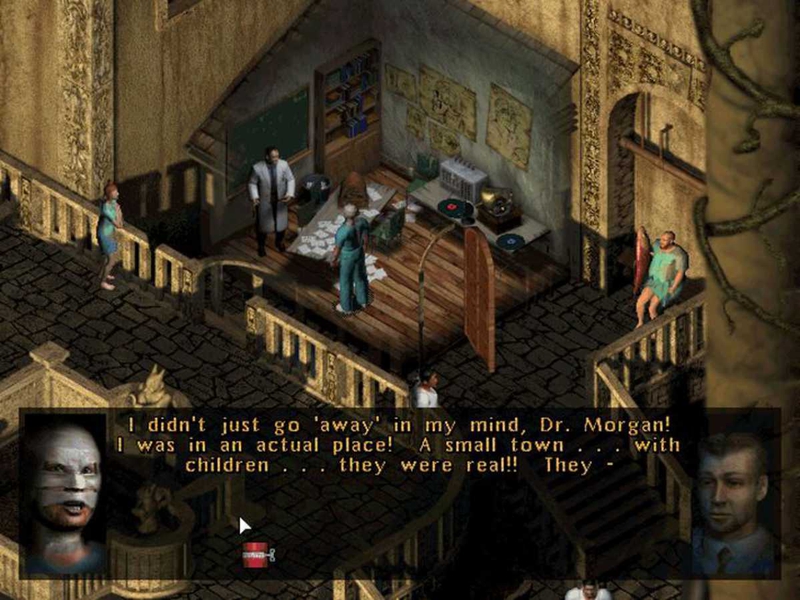 Andrej H, who develops under the name Cuttlefresh, wasn’t born in the 90s and they didn’t live in the US, ground zero for console gaming in the west. “Growing up in a former Eastern Bloc country, we didn’t have access to the latest technical doo-dads. The latest thing that we could afford was a PlayStation 1 with a copy of Resident Evil 3. My cousin and I played that thing constantly when we were together, not really understanding anything, since we were just kids and English was not our forte.”

“I was born in '97,” says Conor Walsh who fits his solo low-rez horror projects around testing and writing work on mainstream games like The Outer Worlds. “We had no small number of PS1 games at my house, and the feeling of playing them elicited a very particular kind of sensation - sort of like looking at an abstract painting, but with more imagination to fill in the gaps.”

That abstraction feels like it’s the key to low-poly horror’s power. Those early PlayStation era graphics certainly have something of the Cubists about them, constructed as they are from chunky box-like body parts that demand the player project personality onto them. It’s that aesthetic, solid yet ephemeral, that is now inspiring this new generation of homebrew game makers; half-remembered early childhood experiences where the details have worn away and all that’s left is an echo of how it made you feel.

Despite being decades apart in terms of inspiration, the low-rez gaming scene feels like it has much in common with recent cultural movements such as hauntology, which uses the aesthetics of 1970s graphic design, public information films and mournful stock music to conjure dislocated and melancholy art that hits particularly hard for Generation X in middle age. Both low-poly horror gaming and hauntology media rely on a shared sense of something dark and sad lurking in the remnants of a pop culture age that was experienced only briefly in early childhood and whose media production methods now seem ancient and abandoned.

“I think the 90s were a time when new ideas were finally able to be explored due to the emergence of realtime 3D,” says Breogán. “Revisiting the stylistic and gameplay concepts from that period allows us to pick back up with that experimentation. Some of what we do recreates things from the time but a lot of the things in the space are fresh ideas. Lower fidelity graphics being easier to achieve for solo developers or small teams also allows us to commit less effort and risk to experimental ideas that may fall flat. This sort of experimental gameplay is where the community can really shine. We can take inspiration from ideas of the period, smash them together, and build upon them.”

Though this is a small scene, with estimates ranging from 500 to 1000 people working seriously on low-poly horror, it is growing. The HauntedPS1 Twitter account has gained more than 20k followers, and its second “demo disc” compilation had far more downloads than the first. Meanwhile, the DreadXP brand, an off-shoot of long-standing horror website Dread Central, is becoming more and more established and is now making some low-rez horror games available commercially, giving the scene the chance to actually make some money to fund future projects.

“There's a lot of reasons that I really appreciate what Dread XP does,” says Breogán, “but I think the biggest is that they're actually paying indie horror developers. I really hope that they can keep that business sustainable and keep creating opportunities. Of course, there’s always the worry that this is a bubble but I personally believe that as long as we continue to make new things with unique concepts and diverse voices things shouldn't get stale and players and developers will continue to find lots to interest them in the space.”

“It’s really incredible to tap into a zeitgeist when it resonates so widely with so many people,” says HauntedPS1’s Aidan Cushing. “We absolutely love to see new developers trying their hand at the format and will always be happy to accept new talent and fans alike into our community. That growth is the lifeblood of the movement. Join a jam, join a community, just make something cool, we love to see it!”

The Haunted PS1 Summer of Shivers game jam is open for submissions now and runs until August 16.