GorePlay: Be the Shark in 'Maneater' and Make It a Bloody May 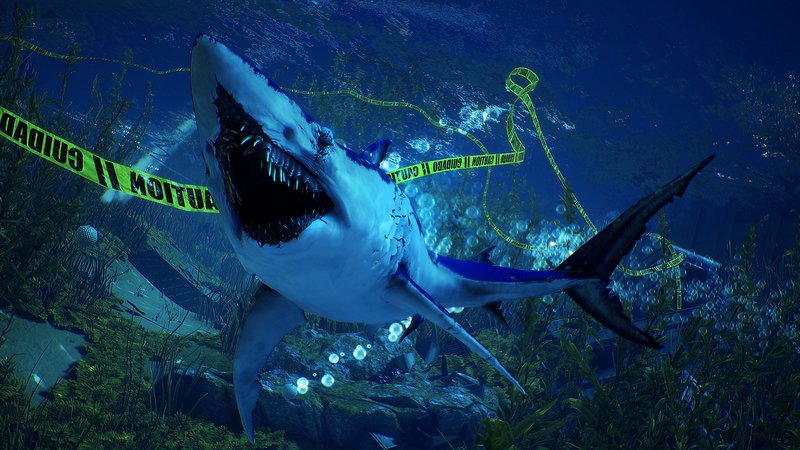 Sadly, few games let you play as the villain, and fewer still let you play as nature’s most remorseless killing machine. Maneater casts you as a bull shark, prowling the waters around a U.S. coastal town. Your mission is to get revenge on the shark hunter who killed your mom, yanked you from her belly and tossed you aside. You, at least, got to take one of his hands in the process, but now you’re fully grown and it’s payback time.

So far, so Jaws: The Revenge, but Maneater ultimately owes more to the likes of Sharknado than even the goofiest sequel to Spielberg’s masterpiece. Maneater is a full-blown shark RPG, in which you munch on other aquatic life and level up your evolution to gain unlikely new powers. Bone armor? Aerial spin attacks? Electrical spikes? Yeah, you can get all of these, meaning that the realm of earthly oceanography is but a distant memory by the time you reach the end.

Getting there is certainly fun, at least in small doses. The big draw for Fango readers is, of course, the chance to head to the surface and wreak havoc on swimmers, jet-skiers and other human targets. The game goes out of its way to make this mayhem accessible and entertaining, but true horror gamers may find the action a little tame. Sure, there are splashes of blood, but bodies simply disappear as you chomp them when the genre pretty much demands that limbs and guts should be everywhere.

It is also a big game, with various biomes where you are free to swim. From a murky bayou to polluted lakes and ritzy resorts, there is a surprising amount of scenery changes for a game that mostly takes place underwater. Each area also boasts its own apex predator that you will need to face and defeat to fully expand your suite of shark abilities.‍

Maneater’s biggest problem is that it is, by nature, limited by its star and setting. You will swim and dash towards prey, gobble them up and take down divers and hunters, but it starts to get repetitive long before the end. Chew it up in bite-sized play sessions, and its slender charms last longer.

'Kill It With Fire: Ignition' (PC)

From one feared natural predator to another: spiders. Kill It With Fire may not look like a horror game with its cheery color palette and pristine domestic setting, but it’s basically the unofficial Arachnophobia game for which fans have been waiting.

As for what you have to do, the clue is in the title. Spders infest your home, and you have to kill them. Fire is just one option – there are ninja throwing stars, guns, bombs and if all else fails, you can simply smash them with the clipboard that keeps track of your objectives.

The more spiders you kill, the more cupboards, drawers and closets open, adding more tools to your arsenal. It doesn’t take long for your suburban dream pad to be reduced to utter carnage as you wildly thrash away at your creeping enemies.

The genius of the game is that it doesn’t overwhelm you with spiders at any one time. For the most part, you will face two or three at a time, and they will scuttle and hide, causing you to cautiously lift every cushion and check every ornament and corner to see where they have gone. Even though the spiders can’t really do you any harm, it is genuinely nerve-wracking stuff. If you fear spiders, it’s easily one of the tensest (if very silly) games around.

The full game isn’t out yet, but if you head over to Steam, you can download the Ignition demo that gives you an extra generous portion of the game. Do it. It’s a blast.

It’s back to more traditional horror gaming territory for this first-person creep-‘em-up that is set in a small town besieged by demonic forces and torn between two realities. OK, so, yes: Silent Hill. Again. But don’t let that generic premise put you off. Those Who Remain has a unique tone and personality and amply rewards those who submit to its darker corners.

Darkness, it turns out, is integral to this game. You are playing as a man driving across the state to break things off with his lover, his estranged wife and child left at home. Unfortunately for him, he picks a motel in the town of Dormont for his layover and finds himself trapped in the town as reality falls apart and hellish forces encroach. Staying in the light is key to your survival, and it is also the source of the game’s puzzles as you work out how to eliminate those perilous areas of darkness to get to where you need to be.

The townsfolk are also very active, each with their past misdeeds and regrets ripe for supernatural retribution. Through your interactions with them, you get to decide whether to redeem or doom them, choices that play a part in deciding which of the game’s multiple endings you receive.

The graphics are great, and the town feels like a real and tangible place with purpose and history, not just a spooky diorama for you to walk through. Lots of games play the “psychological horror” card, but few do it well. Those Who Remain is genuinely weird and unsettling, with a strong grasp on the story it wants to tell and is highly recommended for fans of surreal small-town frights.

First-person creepiness is also on offer in Someday You’ll Return, a game we have covered in previous GorePlay columns. You are, once again, a troubled man on a mission – this time searching for your missing daughter in a remote Czech forest. Spooky shit, inevitably, goes down.

It is worth noting that Someday You’ll Return is the product of just two people and five years’ work. In that regard, it’s kind of a phenomenal achievement. This is a robust game world crammed with features. There is no combat, but there is GPS tracking, herbalism and crafting, psychological effects – it is a lot to take in, even before you face the sinister forces that live among the trees. And what gorgeous trees they are: The forest is rendered so beautifully that one could forgive you for wishing this was just a hiking simulator, and the horror stuff didn’t have to happen at all.

But it does, and that is where the game stumbles. Or rather, it did stumble. The developers have taken the highly unusual decision to remove content from the game post-release. Following feedback after its early May launch, they stripped out “hours of superfluous content” that was tanking their approval rating from players. Some frustrating and narratively inessential puzzles, as well as a new invisibility potion that can make the often-annoying stealth sections much easier, went out. Some of the excised sections are still in the game but now tucked away for more exploratory players to find, rather than forced obstacles in the path for everyone.

This drastic surgery has resulted in a tighter and more enjoyable game, but the suspicion lingers that this is still a game with too many ideas pulling in too many directions to comfortably fit inside the simple “search and rescue” shell that the concept offers. It’s always hard to criticize ambition, and in many ways, it is refreshing to see a game that goes above and beyond in its attempt to offer more than the genre demands. However, the result is still rather lumpen in pace and only sporadically scary.

So, Microsoft gave its big 20/20 reveal of the Xbox Series X games lineup, which was very encouraging for horror fans. Two of the powerful new console’s exclusives are firmly in the horror genre and were given due prominence in the presentation.

The Medium is the new game from Bloober Team, the studio responsible for Layers of Fear and last year’s Blair Witch game. You will play as Marianne, a psychic medium “hounded by visions” and forced to experience both the living and the spirit world. Bloober Team boss Piotr Babieno calls it “our most ambitious game ever.” The prospect is sweetened by the addition of Akira Yamaoka, composer for the Silent Hill series, on the game’s “dual score” with different music for each of the realms Marianne must navigate.

Even more intriguing is Scorn, a first-person game from Serbian developer Ebb Software which takes obvious inspiration from the iconic designs of H.R. Giger. It is hard to tell exactly what the game will entail at this point, only that you will play an entity lured into a “claustrophobic underworld populated with misshapen organic forms dripping with unnamed fluids.” Sounds delightful. You will also “find yourself entirely alone, with only your senses and instincts to guide you through the non-linear nightmare of interconnected spaces.” Whatever that means, it looks phenomenally disgusting.

Both games are due to come out during Xbox Series X’s launch period sometime later this year.

Good news for fans of cult developer SWERY. The long-awaited sequel to his oddball Twin Peaks-homage horror adventure Deadly Premonition will be here on July 2. The catch: It is a Nintendo Switch exclusive. It has been 10 long years since we last joined eccentric FBI agent Francis York Morgan, and he will be tackling an all-new case while undertaking such predictable investigative minigames as… skateboarding? Oh, SWERY. Never change you wonderful maniac.

We can finally see what Nighthawks, a vampire-based hybrid of role-playing, visual novel and life sim from adventure-game specialist Wadjet Eye, will look like as the game now has a teaser trailer. It is set in a version of the modern world where vampires have been revealed, and humans are still working out how to live comfortably alongside bloodsuckers. There will be choices galore, but at the core of the game, you will be running your own undead nightclub. And who doesn’t want to do that? Fingers crossed we can get Grace Jones in to dance. Nighthawks is due in early 2021.

Back in 2013, Dead Island developer Techland was supposed to launch a game called Hellraid, a spiritual sequel to witchcraft-themed shooters like Hexen, but with a crunchy RPG topping. That didn’t happen – and still hasn’t happened – with the game on permanent hiatus. But it’s not dead! Catch a glimpse of what might have been when Techland’s hit parkour-and-zombies sandbox Dying Light gets a Hellraid DLC expansion this summer. The action will kick off with a haunted arcade machine in Dying Light’s Tower location and… well, that’s pretty much all we know. Here is an atmospheric teaser to keep you interested while we wait to see what is actually involved.

Awesome-looking monster vs. Vikings game 'Darkborn' is no more

Finally, sad news from Swedish studio The Outsiders. They dropped the ax on promising Viking horror game Darkborn, canceling the title after four years in development. There are no details beyond a Twitter announcement, which said that “in spite of our best efforts to continue, ultimately we had to make the difficult decision to halt development on the project.” The game, originally called Archenemy, then Project Wight and finally Darkborn, would have seen players taking the role of a folkloric creature being hunted by Vikings. The aim is to turn the tables on pursuers in bloody fashion by using stealth and your monstrous abilities. They completed the game enough to release a hefty gameplay trailer, so watch that, and pour a 40 for what might have been.