A fabled Commodore 64 game from 1985 opens a doorway to the other side in this bold experimental indie experience. 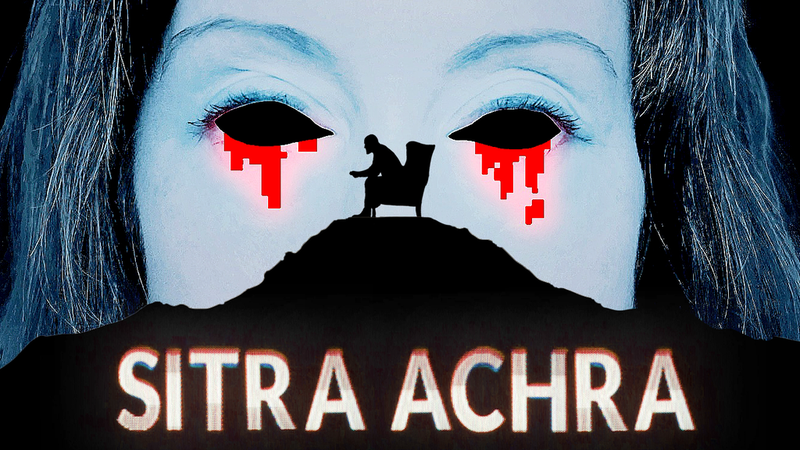 The concept of cursed media has been around for a long time, from the forbidden books that drove protagonists insane in multiple stories by Lovecraft and M.R. James, to the apocalyptic reels of film in John Carpenter's Cigarette Burns, the infernal vinyl recordings of Rob Zombie's Lords of Salem and the sinister children's TV show at the center of the first season of creepypasta TV show Channel Zero. The trope runs the gamut of modern pop media, but one medium is conspicuously less common than others: video games.

Portland-based indie filmmaker Levi Buchanan aims to change that with his new project, Sitra Achra, about a malevolent computer game prototype from the 1980s that sinks its hooks into an obsessed retro game collector. The big difference here is that the film is being developed alongside the game in question. Not only will you get to watch the movie about the game's eerie power, you'll be able to play it yourself.

For Buchanan, who has worked in the games industry since graduating college and counts a writing stint at Nintendo among his various roles, the decision to weave together his love of old games and his love of horror was a natural one. 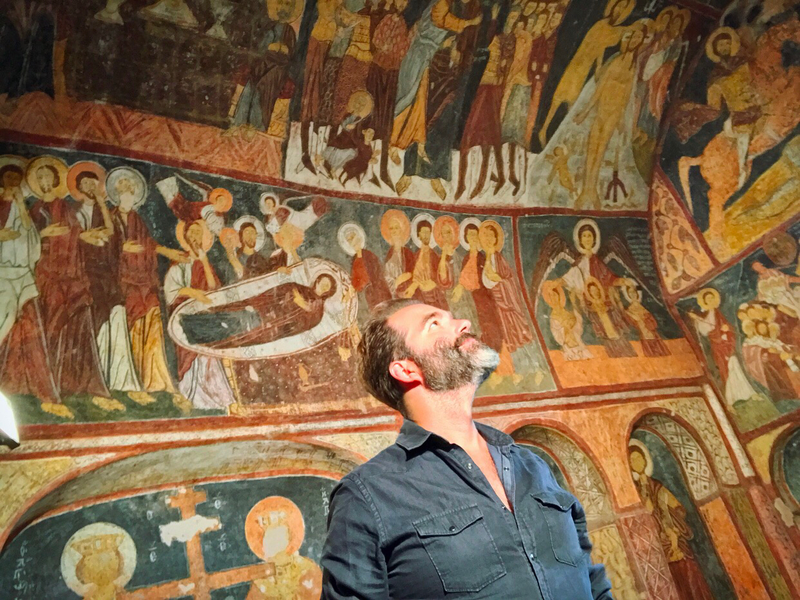 "I really am a lifelong gamer," he says. "Especially since I was an indoor kid, thanks to my congenital heart defect. One of my earliest memories is playing Warlords on the Atari 2600 with my family, all sitting on our orange shag carpet, paddles in hand. Mountain King on the Atari 2600 blew my mind — the skull spirit, the dancing flames, the pitch-black caverns. Then, when you do finally capture the crown, a beep-boop version of "In the Hall of the Mountain King" explodes out of your TV speakers as you race back to the surface. It really was one of the first horror games."

"I consider it a privilege that I was able to experience the birth of a new medium: videogames. That early period — the mid-'70s through the '80s — was exciting. Games were singular visions, willed into existence by wildly creative people. Their creativity constantly pushed up against the limitations of technology, but it stopped nobody from telling stories."

In Jewish mysticism, Sitra Achra is the kabbalistic term for the "other side", an evil realm opposite of everything good and holy. In the story, it's also the name of a Commodore 64 game that vanished in 1985 along with its creator. The legend catches the eye of Andrew Goldstein, a retro game collector and podcaster who finds the lost code and becomes obsessed with beating the game. "Without spoiling too much of the story, Andrew soon discovers that Sitra Achra is more than a game," explains Buchanan. "It's a door. And doors swing both ways". Meanwhile, Andrew's podcast co-hosts, Natasha and Simone, are investigating the origins of this sinister software and the existence of a secret society of occult game developers.

"We're assembling an incredible crew and cast here in the Pacific Northwest," says Buchanan of the live-action portion of his project. "Darius Pierce, who you can see opposite Nicolas Cage in PIG, has signed on to play Andrew. Angela Chandra is playing Simone. Cecily Overman is playing Natasha. Both are such incredible actors. And Nathan Barnatt, who folks might recognize from his turbo-nerd alter-ego Keith Apicary and who is burning up this season's America's Got Talent with his dance moves, is playing one of our villains. Think a cross between Orson Welles and Laurence Olivier in Richard III."

The film will be shot by director of photography Kevin Forrest, who also shot the 2020 remake of The Brain That Wouldn't Die, while the soundtrack is being composed by UK hauntology group Moon Wiring Club.

Given the concepts at work, a key influence is inevitably Videodrome, Cronenberg's analog era body horror about flesh-warping signals hidden in cable TV transmissions. "We've been talking a lot about Possessor, too," says Buchanan. "Really digging into these twin stories of blurring realities as we develop our own visual language for depicting that blur. And I love cursed object movies, such as The Ring and Oculus." 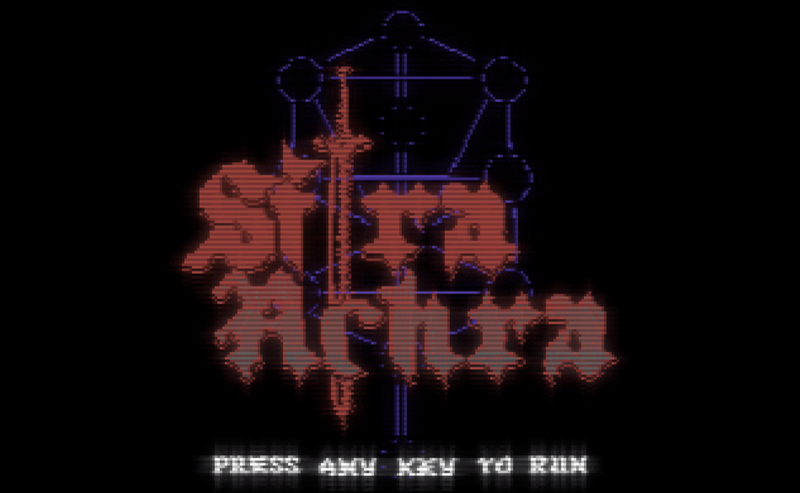 Of course, Sitra Achra is designed to be more than just a film. "I call this an experience because not only is there a movie, but the Commodore 64 game at the center of it is a very real thing that people will be able to play for themselves. The Commodore 64 was a hugely influential machine on me. I really zeroed in on this period, the early 1980s, because the computer games that rose from the ashes of the videogame crash of 1983 were ridiculously creative and started to also really explore horror, such as Aztec Challenge. Oh my god, the music by Paul Norman was my kind of nightmare!"

Simply getting an independent film made is a huge undertaking, as is making an indie game, so doing both simultaneously seems like a special kind of madness. In this case, there's a method to that madness, though. "I wanted to have a very real game on set that Darius could play with — and also play off of because it's a character in the movie, too. It's such a bummer whenever you see a movie or TV show that has a clearly fake game that looks and sounds nothing like an actual game. Without a real game, the spell in Sitra would be broken within minutes."

"But I also want the audience to be able to play that same Sitra Achra game. What an opportunity to potentially deepen their emotional connection to [Andrew] beyond the movie itself. I'm still not entirely over my childhood disappointment that there was no Last Starfighter arcade game waiting for me in the theater lobby! I wanted to feel like I could be chosen to help the Rylan Star League, too. Here, with the Sitra game, the audience can experience Andrew's struggle for themselves."

The job of developing the game belongs to Brandon Rodriguez of indie studio Salt + Pixel. "He's a phenomenal pixel artist and game maker. When I shared the concept and an early draft of the script with him, he got exactly how the game functions within the movie. Not just how the game would play, but also how it would get its hooks into Andrew and not let go until one vanquished the other. Every time he delivers a new build of the game to try out a new level or see a new design, it's so exciting. He's a sorcerer. And he's just nailed the Commodore 64 aesthetic." 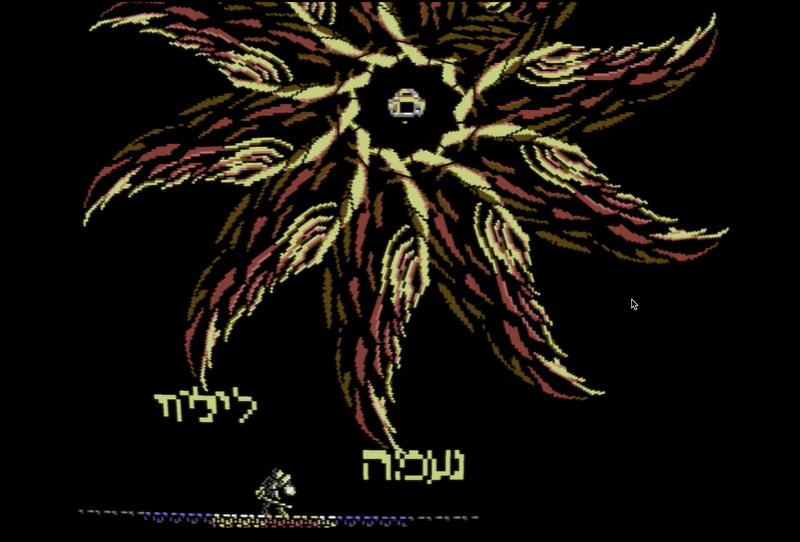 So will people need to see the film to enjoy the game, and vice versa? "Though they work best together, you can definitely experience one without the other. This is mission-critical to me. Brandon intrinsically understood that the Sitra game had to be playable from the moment someone starts it up. It can be weird — it has to be a little weird, considering the story — but not weird for the sake of being weird. Or worse, clobber the player with a puzzle so esoteric that they turn it off within three minutes out of frustration. After all, it's not impossible that someone discovers the game first and that's their entry point into the mythology, which hopefully leads them to the movie. That said, there will be easter eggs in the game that land differently once you've seen the movie. We have some very cool, creepy ideas for hinting at the fates of those that have encountered Sitra Achra."

It also sounds like the crossover between the different media will be a two-way street. "We want to bring techniques and aesthetics from early games into the movie's visual language", explains Buchanan. "Rotoscoping, for example. Using this incredible animation technique, but then rendering it like an old Commodore 64 to make it otherworldly… there's something sinister about the low-tech, the sparseness of graphics, the digital grunginess of it all. Now combine that aesthetic with the real world, mix in a story about a malevolent game prototype that may or may not be a door… I just love the look we're creating. It's really unsettling and creepy."

Just don't go assuming that Sitra Achra is going to be a nostalgic indulgence for gamers of a certain vintage. In fact, if anything, it sounds like the story will be a cautionary tale for those who obsess over the past and use their devotion to act as gatekeeper.

"The dark side of nostalgia, that's a big theme in Sitra Achra. Nostalgia can be poisonous. It can trap you, blind you to new experiences or alternate points of view. Too many people get so possessive over the past without fully appreciating that the past for someone else was maybe worse than it was for you. And nostalgia can also be so exclusionary. I've witnessed it so many times in games — a pissing contest over who knows more about Mega Man or whatever. It's boring. If you love something — a game, a movie, whatever — why not joyfully share it with people that are interested and grow the celebration of it!"