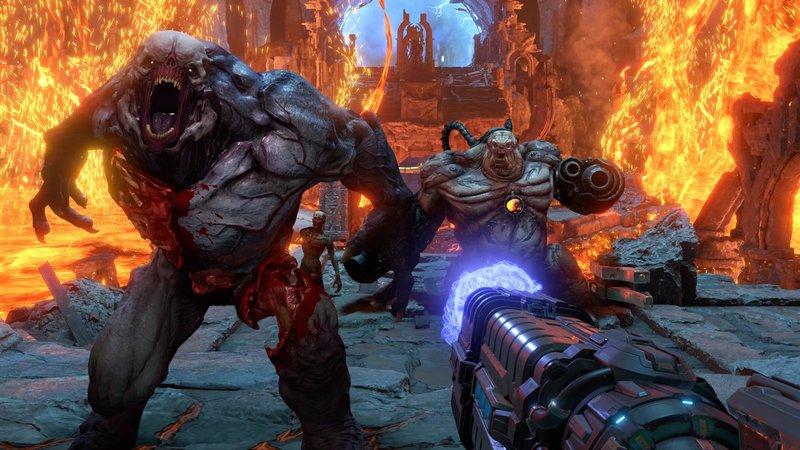 Well, things sure got weird this month and with pretty much everyone stuck indoors, the games industry is one of the few to see an upturn – in digital sales at least. It also helps that two heavy-hitting horror-centric franchises made their return, giving us plenty of reasons to keep the curtains closed and concentrate on virtual mayhem for a while.

The 2016 Doom reboot managed the seemingly impossible task of taking the iconic 1990s blaster and updating it for modern tastes without sacrificing the relentless nature of the original. This follow-up doubles down on everything that worked in that reboot, offering a gore-soaked first-person shooter that actively encourages you to reach increasing levels of manic destruction.

As well as classic returning foes from the 2016 game, Eternal also reimagines monsters, such as the Arachnotron and Archvile, from the various sequels giving you a wider variety of targets to dismember. And dismember them you will, as not only has your arsenal been upgraded to include such delights as a long-range meat hook grapple and shoulder-mounted grenade launchers, but the damage you do to enemies is more specific than ever. Much like Dead Space, you can now target limbs individually, slicing troublesome creatures into less threatening pieces, like Monty Python’s hapless Black Knight.

The gameplay emphasis is once again on “gory kills” where you weaken an enemy and then destroy them messily in order to top up your health. In other words, and true to Doom’s core ethos, timid play gets you nowhere. To survive, you must engage constantly and aggressively in bloody combat. The resulting adrenalin rush never gets old.

Throw in some cool new multiplayer modes – including a 2v1 match where two players take the role of demons stalking a fully-loaded human player – and you’ve got a game that keeps on giving even after you’ve bled the story campaign dry. That story is a little intrusive, at least for those who prefer their Doom to be light on plot, but the sheer balls-out energy of the action sees you through. If you thought you knew what “over-the-top” means, play Doom Eternal and think again.

“This new plague is spreading at a terrifying rate…” So began the recent demo version of this survival horror remake, an opening gambit which maybe hit a little too close to home in 2020. Still, if you are going to face the after effects of a rampant virus it might as well be an enjoyably fiction one that turns people into a gut-munching ghouls and mutated super-beings rather than the depressingly real one which just makes people sick and dead.

As with the remake of Resident Evil 2 this is a visually sumptuous update of a proven classic, balancing bracingly old-school gameplay with arcane puzzles, limited health and ammo, and labyrinthine locations against modern control schemes and pacing. If you rinsed the original game back in the late ‘90s, you’ll find much that is familiar here but also just enough tweaks and changes to keep it feeling fresh. The menacing Nemesis, a hulking bio-weapon that hunts you throughout the story, is particularly nasty this time around, no longer respecting the safe zones that Capcom offered in the past, and forcing you to keep on your guard at all times.

Most interesting is that this rebundled version also comes with Resident Evil: Resistance, an asymmetric multiplayer mode set in the RE universe. The series has never quite cracked the online nut in the past, but this is a bold take on multiplayer standards with four players co-operating to survive what appears to be a typical Resident Evil scenario while a fifth player sits in a virtual control room, tracking their progress and drawing cards in order to try and fuck up their best laid plans. It’s a clever twist, one that is immediately more fiendish and challenging than just having other players as zombies and monsters. Instead, this Mastermind not only gets to spawn creatures for the others to fight, but they can lock doors, spring traps and even use camera-mounted guns to pick away at the good guys’ resolve. As with any new idea injected into an existing franchise, some will dislike it immensely but as a free and optional offshoot it actually suggests an exciting new direction for the series.

Nothing to do with Tommy Wiseau, a series of intimate puzzle games may seem an unlikely conduit for creeping dread but The Room and its sequels, all produced by UK studio Fireproof, have gradually evolved from quaint puzzle boxes to full-on Lovecraftian cosmic horror, without ever losing sight of their strengths as tactile brainteasers.

Presented as a series of escape rooms filled with interconnected gadgets, objects and devices, each of which must be closely inspected, prodded, poked and turned around to reveal its secrets, the series is ideal for VR as you can now literally lean in closer and, using motion controllers, grab and manipulate mechanisms in order to progress. Even stripped of all its genre trappings, it’s a thoroughly satisfying experience.

Those trappings make all the difference though. Set in London in 1908, the story kicks off with the mysterious disappearance of a famed archaeologist, currently investigating Egyptian relics. Needless to say, as the detective assigned to the case you’re soon drawn into a world of occult conspiracy and supernatural menace, all realised through superb location design and fiendish puzzles.

For those who yearn for the days of Hammer Horror, it’s an atmospheric delight.

Horror gaming of a more predictable style is on offer in Infliction, now available in a revamped console edition. It’s another first-person exploration creep-em-up, opening with you returning to your sizable suburban home to carry out a seemingly menial chore. As you wander the house, however, you trigger a series of jolts and twists that bring in elements from serial killer fiction and classic ghost stories.

In technical terms, the game often belies its indie roots. Pretty much everything in the house is interactive to some degree, with hundreds of objects able to be picked up and studied in close detail. Sometimes these unlock memory fragments which fill out the story. Often it’s just another cereal box. If nothing else, the game is a fine advertisement for the game’s texture artists and 3D modellers.

The story delivers some decent twists, even if genre fans will be better primed than most to anticipate them. In some ways it tries to explore similar terrain to the recent Invisible Man movie, but it suffers for choosing entirely the wrong POV to do it from, and stumbles when grappling with real world issues that are deadly serious. Still, it’s a cut above a lot of similar games both in ambition and execution.

The Dark Pictures Anthology series of interactive horror yarns, from Until Dawn studio Supermassive Games, got off to a good start with Man of Medan, a claustrophobic tale of nautical terror. Now we’ve got our first look at what Little Hope, the next entry in the series, will be about.

Four college students and their professor find themselves trapped in the Silent Hill-esque fog-shrouded streets of the titular town, and there’s a definite whiff of Blair Witch to the woodcraft totems and folk horror overtones on display in the trailer. All of which is to say that this one looks a little generic in its concept, so here’s hoping there’s a conceptual twist that they’re holding back.

The Dark Pictures: Little Hope is due later this year for PS4, Xbox One and PC.

Hard to believe that it’s already been ten years since Frictional Games shook up horror gaming with Amnesia: The Dark Descent, its first-person plunge into paranoid psychosis. A much weirder and somewhat controversial sequel, A Machine for Pigs, followed thanks to developer The Chinese Room but now Frictional is giving us its own follow-up titled Amnesia: Rebirth. Expect a completely new setting and storyline, following an explorer called Tasi Trianon who awakes in the Algerian desert with no idea how they got there. You can also expect emotional unease rather than the usual parade of jump scares that the game’s many imitators have fallen back on. For those who played Frictional’s philosophical sci-fi game SOMA, you’ll know this is something the studio can really deliver on. Amnesia: Rebirth is due in the Fall for PS4 and PC.

Dead by Daylight’s latest DLC is a Weird West special

Four years on from release and multiplayer slasher romp Dead by Daylight is still offering new content for players. Just released is Chains of Hate, a new bundle containing Dead Dawg Saloon, a new ghost town map, with a new cowboy-themed killer called The Deathslinger and a new survivor character called Zarina Kassir to battle it out amongst the dusty shacks and covered wagons. There are also three new perks for the killer and survivors.

Promising horror adventure Death of Rose is dead in the water

Some bad news now as Death of Rose, a great looking survival horror game which we profiled last month, has been canned by developer Artur Łączkowski. “For this moment, I don’t feel I can fully express or present my potential, skills and vision in this project”, he posted on Twitter. He did, however, go on to suggest the game may come back as a “completely new, redesigned and improved project”. Fingers crossed.