In which THE KINGCAST gets some answers straight from the Shoggoth's mouth. 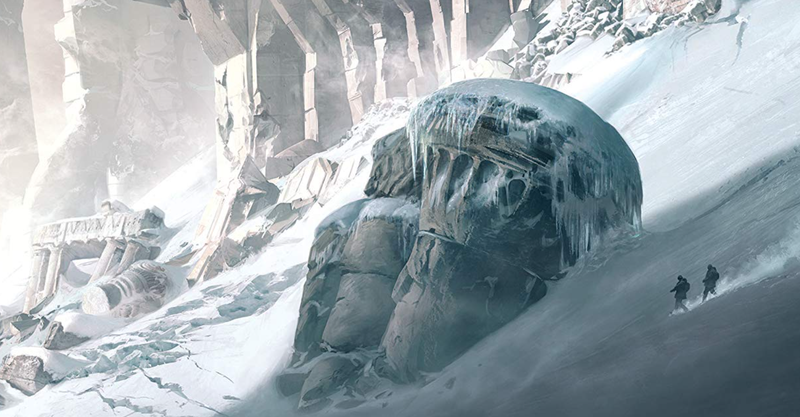 A new episode of FANGORIA's THE KINGCAST podcast dropped today, one which finds Oscar-winning director Guillermo del Toro (The Shape of Water, Pan's Labyrinth) chatting with us about his favorite Stephen King novels, what makes clowns so damn scary, and, of course, this month's Nightmare Alley. But if you think we were gonna' let him outta there without asking about the status of his long-gestating adaptation of H.P. Lovecraft's At the Mountains of Madness, well, buddy, you are sorely mistaken.

Early in the episode, del Toro has this to say upon being asked whether or not his working relationship with Netflix might lead to one of his oldest passion projects finally making its way to screens:

Well, listen, take a wild guess which were the first projects I presented, you know? (laughs) I went through the cupboards and found (The Count of) Monte Cristo, (At the) Mountains of Madness. Those were a couple of the ones I presented first. The thing with Mountains is, the screenplay I co-wrote fifteen years ago is not the screenplay I would do now, so I need to do a rewrite. Not only to scale it down somehow, but because back then I was trying to bridge the scale of it with elements that would make it go through the studio machinery...

I don't think I need to reconcile that anymore. I can go to a far more esoteric, weirder, smaller version of it. You know, where I can go back to some of the scenes that were left out. Some of the big set pieces I designed, for example, I have no appetite for. Like, I've already done this or that giant set piece. I feel like going into a weirder direction.

I know a few things will stay. I know the ending we have is one the most intriguing, weird, unsettling endings, for me. There's about four horror set pieces that I love in the original script. So, you know, it would be my hope. I certainly get a phone call every six months from Don Murphy going "Are we doing this or what? Are you doing this next or what?" and I say "I have to take the time to rewrite it."

"Right now I'm developing two screenplays, one of which I think will be right away next. I'm busy finishing Pinocchio, producing Cabinet of Curiosities in Toronto and I'm settling down from the post-pandemic sort of domino [effect]. Everything that I had spaced out for three years, all of a sudden the deliveries came all at the same time. But it is my hope."

For anyone who hasn't followed this saga over the years: About a decade ago and following years of development (which included a completed script, over 300 pieces of pre-production art/modeling, and a proposed $150M budget), del Toro's At the Mountains of Madness adaptation was shut down at Universal. The film would've found del Toro working alongside executive producer James Cameron and leading man Tom Cruise, a combination of star power behind and before the cameras rarely seen in horror's Lovecraft subgenre. Horror fans were crushed.

Universal's decision not to move forward has been blamed on everything from the lukewarm response to Ridley Scott's Prometheus (which would've shared a number of similarities with del Toro's adaptation) to the studio getting cold feet over the R-rated project's price tag, but it's really neither here nor there at this point. The project was shelved, del Toro moved on, and fans were left daydreaming about what could have been … but based on what del Toro's saying now, the film may not be as dead as we thought. Here's hoping he finds time for that rewrite, and that — when the time comes — Netflix (or some other studio with appropriately deep pockets) is standing by with their checkbook in hand!

You can head on over here to listen to the episode for yourself, at which time you'll also learn whether or not del Toro plans on bringing Cruise back for the role, which Stephen King novel he wants to adapt more than any other, and what we can expect when Nightmare Alley hits theaters on December 17th.