Tearing into the HALLOWEEN KILLS Extended Cut On Blu-ray, DVD, and Digital. 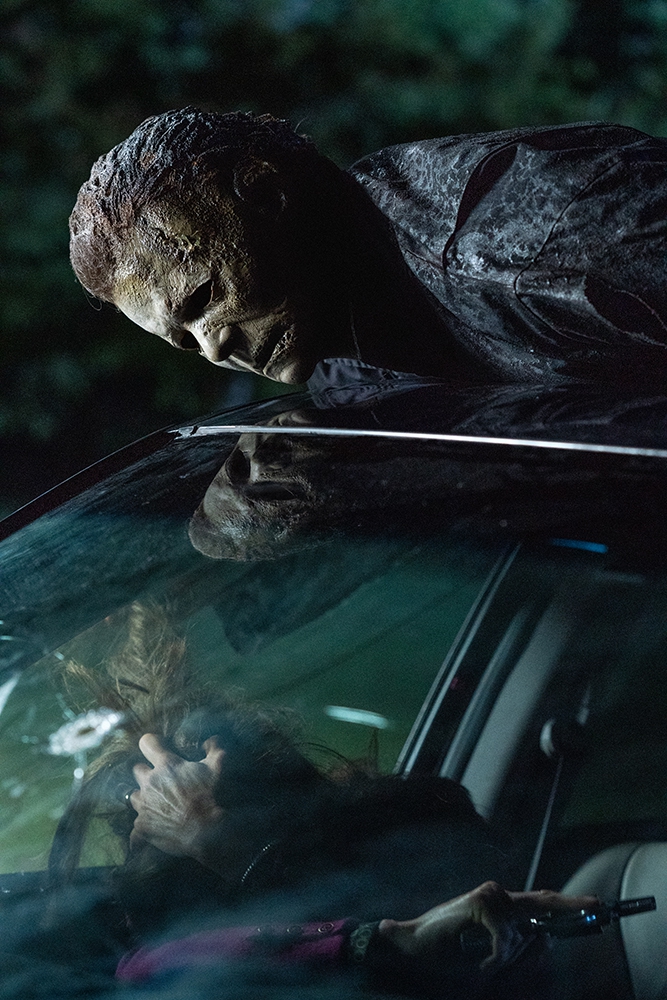 Like many fans, I was disappointed when Halloween (2018) came to Blu-ray without an accompanying commentary track, making it the only film in the series to date that doesn't have one. It also didn't include the original ending among its deleted scenes, which seemed like a missed opportunity, as even casual fans knew of its existence (it showed at test screenings). It could only have helped improve the final version's reputation for those who felt the ending they went with was weak (I assure you, the original one wasn't as good). Luckily, Blumhouse and Universal seemed to take the complaints to heart, as Halloween Kills is now on disc in an extended version that has an extra scene at the end that the final cut omitted, as well as a commentary with director David Gordon Green and stars Jamie Lee Curtis and Judy Greer.

Unfortunately, the trio doesn't say anything about the revised denouement; their track curiously ends without fanfare over Karen's murder, with Greer talking about how she talked to FX guru Chris Nelson about some of his ideas for her death, only to stop short of saying what those ideas were (Green himself has nothing to add). At first, I assumed their sudden silence was due to the possibility that they recorded their track while watching the theatrical cut (both versions are included on the disc, for the record), and they'd come back when the restored scene ended, but nope. I listened all the way to the end of the credits, and they never returned; the trio simply vanished like Michael Myers himself did at the end of the original film.

Luckily, Green has explained elsewhere why the scene was dropped: it ultimately seemed to be setting up a different movie than is currently planned for Halloween Ends (which, if Covid allows it, will be in theaters this fall), making it an odd way to close things out here. If you've seen any of the film's marketing, you've basically already seen it; it's only a few shots, and one of them is in all of the trailers, with Laurie walking down the hall of the hospital, knife in hand and promising Michael that she is coming for him. What prompts it is Karen's death, which Laurie seems to be aware of via some kind of telepathic link (so THAT'S where Jamie Lloyd got it from!), but here we see that she calls Karen's phone after getting her "feeling", only for Michael to pick it up and confirm her daughter's demise with his famous heavy breathing. That's all there is to it; anyone expecting much of a change in this promised ALTERNATE ENDING! will be disappointed, especially since they've already seen half of it in the trailer. 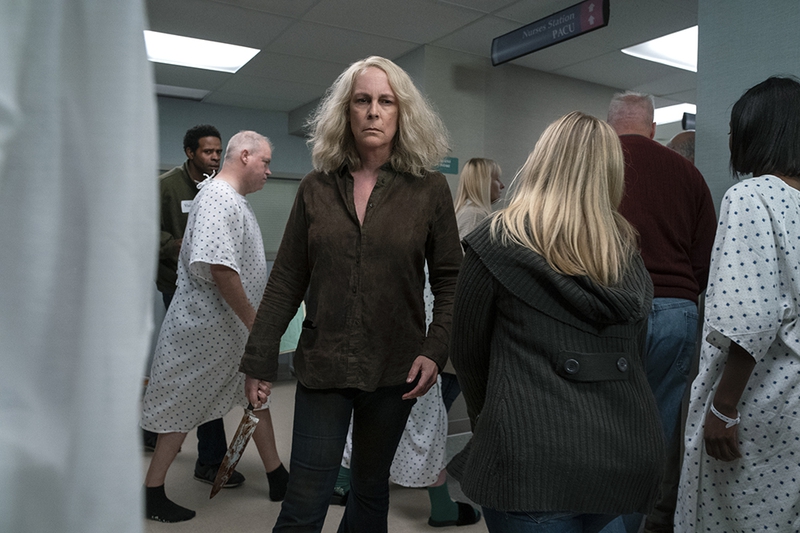 The rest of the track, prior to their unexplained exit, is a pretty lively affair, though, after a while, you might wish that Green had recorded one solo or with one of his collaborators while the stars (perhaps with Andi "Allyson" Matichak joining them) had their own. Any Halloween fan worth their salt probably knows by now that Curtis doesn't actually like horror movies, but it seems Greer is just as skittish, so the two spend half their time either talking about how they "can't watch" what's currently on screen or (mostly Curtis in this case) mockingly chastising Green for being "sick" enough to show such things. Since I am willing to bet that the majority of people sitting down for a Halloween sequel commentary track are not as repulsed by the sight of slasher movie violence, their comments can get a little tiresome after a while, as it seems Green - known for being a gentleman! - is content to let them be squeamish instead of interrupting to make observations about those scenes himself.

That said, there's still a lot of trivia to learn along the way for those who care about such things, though some of it may have been revealed on podcasts or interviews before. Some of my personal favorite discoveries: the hospital sets were recycled from the DC revival of Swamp Thing starring Derek Mears, Bob Odenkirk didn't charge them for the use of his photo (a replacement for Lynda's boyfriend Bob, whose photo they couldn't license due to some contractual issue), and even though the series has been rebooted/remade more times than the average person can count, Green reveals that the contracts for the film do indeed list it as "Halloween 12", which I find amusing. He also notes where Nick Castle would have appeared, in the early scene where Myers kills Laurie's neighbors; at one point the drone that the lady is flying around had a camera on it, and in those grainy shots (which you can see on the other supplements) that is OG Shape Nick Castle it spies before he swats the thing away.

My favorite reveal, however, is that Curtis herself partially invented the history between Laurie and Frank (Will Patton). As she explains, on the set of the 2018 film, she told Patton that in her mind, Frank was Karen's father, the result of a drunken bar hookup nearly 40 years prior, information Frank himself isn't privy to. Green and his co-writers used that rather sordid bit of invention and modified it to create the lovely scene we get in this film, where Laurie talks about the night they kissed and how Frank was hoping for more, but (due to her crush on Ben Tramer!) that was the extent of it. Since Karen's father has never been identified, this conversation cancels out Frank as an option, paving the way for Tramer (or maybe even Dick Baxter) to appear in the next film. Poor Allyson has no family left beyond Laurie, maybe meeting her maternal grandfather could make up for it a bit?

Strangely, one name that doesn't come up much is John Carpenter. While he was all over the (brief) supplements on the previous film, he's nowhere to be seen here, and the only time he is directly invoked is during a brief discussion of the music. The 1978 film is mentioned quite often, however, particularly in a behind-the-scenes bit that proves once and for all that it is NOT a visual effect that brought Dr. Loomis back into the series. They've talked about how Loomis was recreated thanks to a crew member who already looked a lot like Donald Pleasence, enhanced with some of Nelson's prosthetic wizardry, but here we can actually see the guy in the flesh, getting his facial appliances on (Nelson worries that his work might inadvertently make the guy look less like Pleasence than he already did) and filming his scenes in behind-the-scenes footage, which should end any dumb debate that he was brought to life the same way they were able to have (one time Loomis candidate!) Peter Cushing appear in Rogue One. 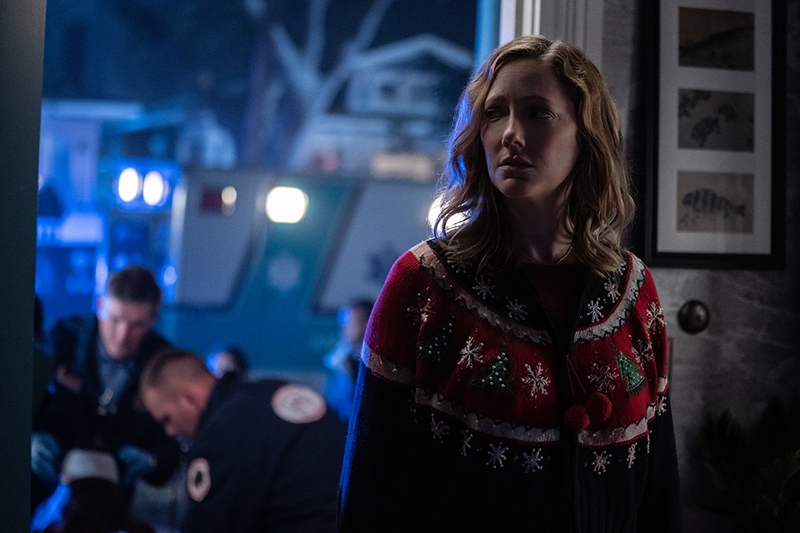 The other bonus features are par for the course for Universal's Blu-rays, in that they are very brief (3-5 minutes apiece) but thankfully can be watched all together via a "Play All" function. There are some deleted scenes of little use (one gives Brackett a better introduction, though), a look at how the house fire was achieved, the cast praising each other, etc. Nothing too exciting or essential, though if you love Greer (why wouldn't you?), you should be delighted with the gag reel, as she seems to be having more fun than anyone else on the set. Also, for those who didn't count the deaths themselves, there's a supercut showing a holiday-appropriate 31 kills in the film. And for longtime Fango fiends, our boy Ryan Turek (né Rotten) pops up pretty frequently to talk about this or that, and it's hard not to smile at his obvious excitement for getting to help shape (heh) the direction of the franchise that he grew up with just like the rest of us. Good on him! 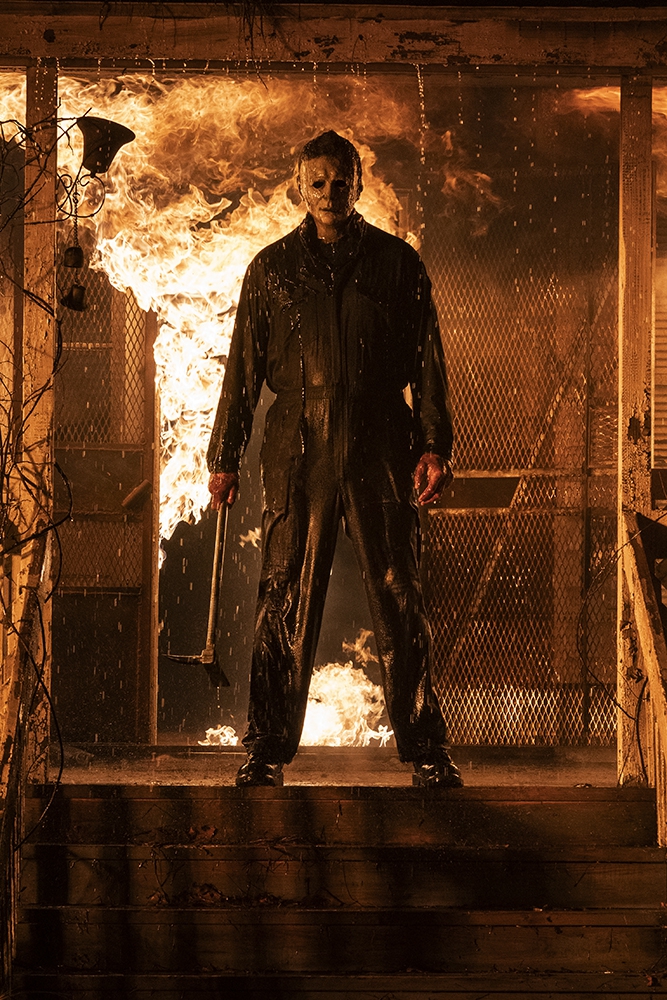 Hopefully, after Ends has come and gone, Universal sees fit to repackage this trio of sequels with some meatier extras. I know the glory days of such things are behind us (at least, from the studios - Arrow or Scream Factory will surely pack these entries to the gills in 20 years), but given both the success of the films and the legacy of the franchise as a whole, they should know that a trilogy set with hours of extras (give Turek a mic for his own commentary, dammit!) will be catnip to the fanbase, and maybe even an easy sell to casual viewers if they spot it on the shelf around October. If that doesn't come to pass, however you feel about these two films themselves, I think we can all agree that this release is more of a proper "special edition" than was given to the previous film, and hopefully, they'll give Halloween Ends equal (or more) attention when it comes along next year.

P.S. I'd be remiss if I didn't stop to acknowledge and applaud Universal's home video team for providing subtitles for the commentary track as well as the film, and the bulk of the behind-the-scenes pieces as well. It's one of those things that should be a given by now, but sadly remains the exception instead of the rule. Here's hoping the other studios - major or otherwise - continue to consider everything on the disc for those who rely on the captions to follow along, instead of just providing them for the film and nothing else.

Want your own copy? Head to Twitter and enter our Halloween Kills giveaway or click here to purchase yours now. 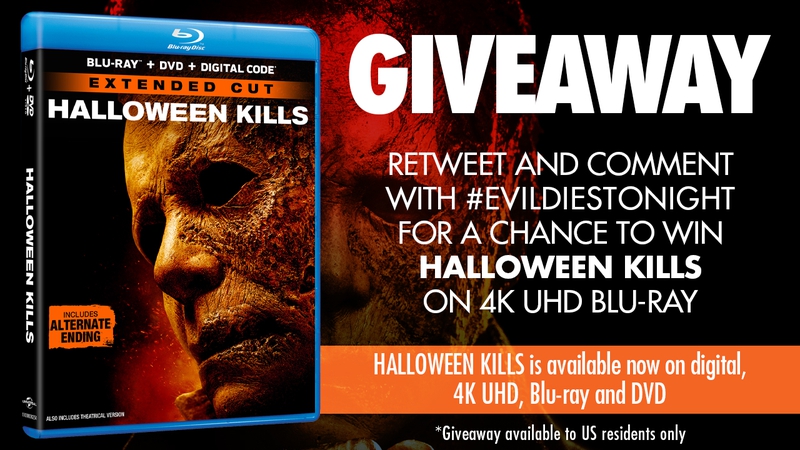