Watch Bonnie Aarons totally unhinged in this new trailer for I LIVE ALONE. 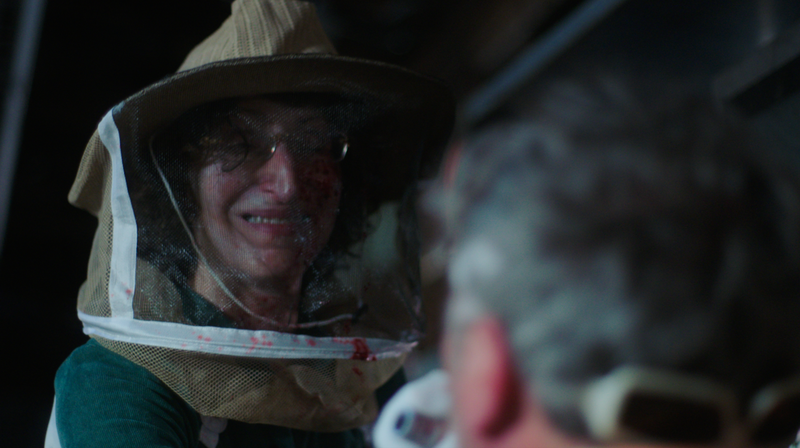 As many of us prepare to head home and visit family for the holidays, inhabiting spaces and homes that are possibly a mix of both familiar and foreign to our day-to-day routines, Krsy Fox is serving up a new take on the aunt you rarely visit. Bonnie Aarons (The Nun, The Conjuring 2) stars as Aunt Len, a kindly aunt and... potential serial killer. After spending the last forty years as a recluse, Aunt Len's estranged sixteen-year-old niece Parker (Nyaling Marenah) comes to live with her. Violence, tension, and twists ensue as Aunt Len is pushed out of her comfort zone. Here's what writer and director Krsy Fox had to say about the upcoming project:

Making I Live Alone was such an incredibly creative process. My team and I had worked together on several films at this point and we are like family. It felt like we'd show up on set every day seeing how far we could push a scene or an effect to make the craziest film possible. Nyaling as Parker was the anchor and it was Bonnie's job to come completely unhinged as Aunt Len. You will be afraid of her character and somehow love her and cheer her on at the same time. There is a scene where Bonnie has to stab me, and I have to tell you my fear was completely real. Not to mention there was blood! SO MUCH BLOOD!

I Live Alone will be released digitally by Gravitas Ventures December 21, 2021 click here to pre-order now, you can also enjoy an early screening of the film at LA Comic Con December 5th at 3 pm with a Q&A to follow. Fox and Aarons previously teamed up for horror-comedy FRANK, which is now available digitally.