Lock Your Doors: THE STRANGERS Is Getting A Remake

And it could be the first chapter in a new trilogy. 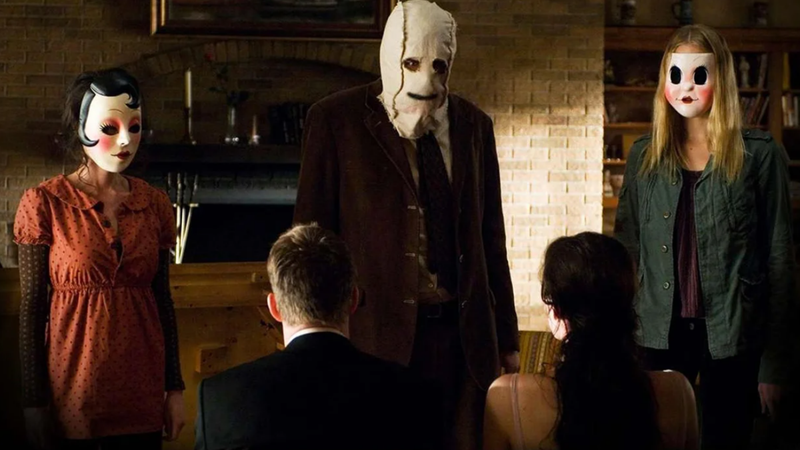 Hey, remember The Strangers? Came out in 2008, had Scott Speedman and Liv Tyler in it? A trio of masked freaks break into their house, terrorizes them and such? Generated a sequel a decade later called The Strangers: Prey by Night? Yeah, you know the one! Well, it's getting a remake now, and this time Renny Harlin's in the director's chair.

The news comes to us from Deadline, who broke the story a few minutes ago:

"Madelaine Petsch (Riverdale), Froy Gutierrez (Cruel Summer) and Gabriel Basso (Hillbilly Elegy) have been tapped to star in a Lionsgate remake of the 2008 horror The Strangers, which has entered production in Slovakia. Renny Harlin (Cliffhanger) is directing the film, eyed as the first in a trilogy, having locked in a deal to helm the subsequent pair."

Damn, not just a remake, but possibly the start of a new trilogy? A bold thing to be saying before the first one's even shot, I suppose, but I do admire the moxie! So, what's this one gonna be about? Deadline continues:

"The new Strangers film will follow Petsch’s character as she drives cross-country with her longtime boyfriend (Gutierrez) to begin a new life in the Pacific Northwest. When their car breaks down in Venus, Oregon, they’re forced to spend the night in a secluded Airbnb, where they are terrorized from dusk till dawn by three masked strangers."

OK, so more The Strangers-style shenanigans: some folks in a house, some other folks trying to get in, a presumable bloodbath ensues. We're into it! It's possible some folks will cock an eyebrow at Harlin helming this one (the dude, quite frankly, has created something of an uneven filmography), but when the man delivers, he delivers. Fingers crossed!

Given that production just started on the new Strangers, we're not expecting any further developments on this one for quite some time, but of course we're curious to see how this pans out, and will (also) of course make sure to keep you informed as those updates roll in. Stay tuned for those, and in the meantime: make sure you're locking your doors at night, gang. Never know when there might be Strangers about.