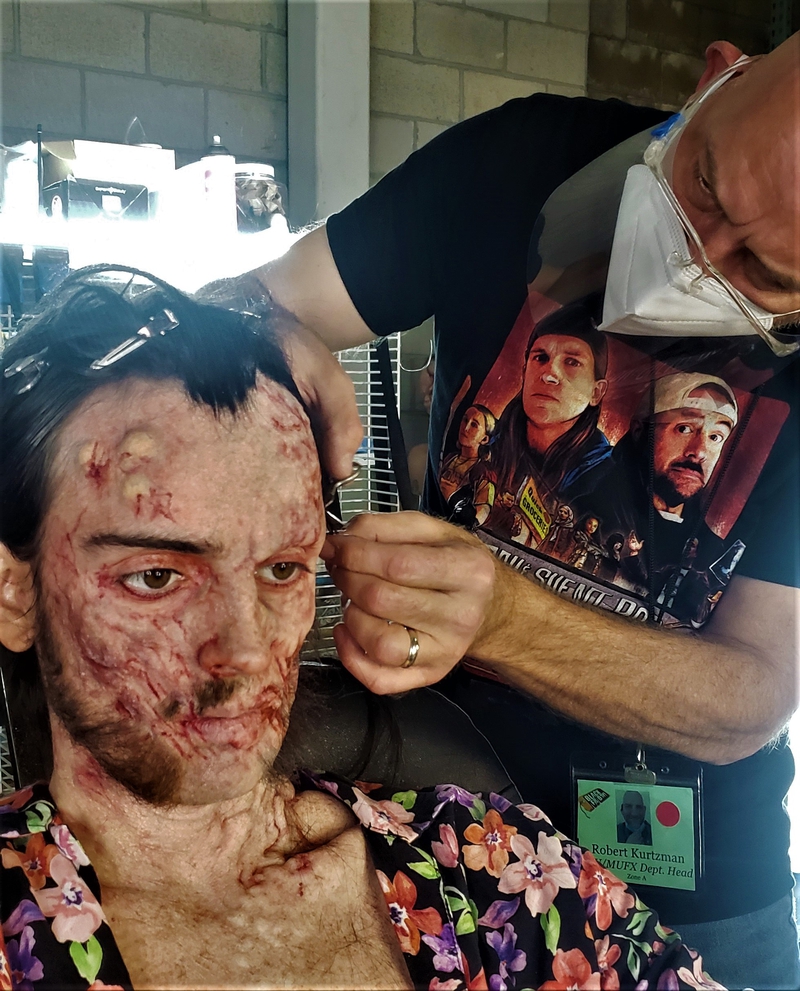 In the more than 35 years that he's been a part of the special effects industry, FX legend Robert Kurtzman has been involved with well over 15 different horror movie franchises, more than 150 films and television projects, and has even stretched himself creatively outside of the makeup world by creating enduring genre stories like Wishmaster and From Dusk Till Dawn. With Black Friday, the latest film to feature his incredibly imaginative FX work, Kurtzman brings to life amorphous life-sucking blobs, hordes of the infected, and even an 80-foot monster to boot in the ambitious horror-comedy that follows a group of toy store employees dealing with the worst possible customers ever. That would be a tall order for many artists working in Hollywood, but for Kurtzman and his team at Robert Kurtzman MUFX, they relished the opportunity to enjoy some creative freedom while helping director Casey Tebo fully realize the vision he had for his indie horror-comedy.

"I think one of the things that excited me the most about Black Friday was when I read the script and realized that we had a lot of latitude in coming up with something original," explained Kurtzman. "This wasn't going to be just another straightforward zombie film. There were actual transformations and creatures and an idea behind it where it wasn't just infected people running around. There are also these masses that crash everywhere, and then you see one of the masses grow into the giant 'Mega Shopper' monster that comes out of the top of the store, and I was like, 'Wow, this is going to be so crazy and so much fun.' And getting to do that practically was great - thank God they didn't say, 'Oh, that's going to be all CGI.' We were able to build an actual practical suit that an actor wore and we shot him in it against a green screen so we could make it look like there was an actual 80-foot tall monster." 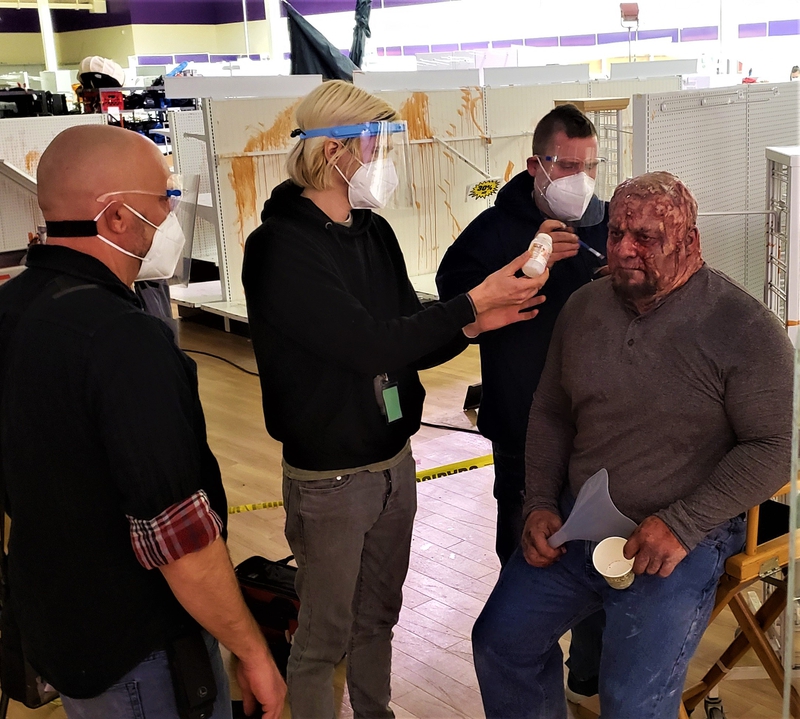 "When you're making these lower-budget films, what you don't want is your movie to look like one of those older SyFy Channel movies, where the creature was always digital, and it looked like a bad cartoon. They never looked good. So I think a lot of these filmmakers working on the indie side of things still want to go practical because the thinking is, 'Why not? Why can't I do most of this stuff practical?' It's always possible if you plan right, and there's something there for the actors to interact with, too."

As Kurtzman mentioned, he was thrilled when he discovered that the creatures he was going to bring to life (or making "un-alive" might be more accurate) for Black Friday weren't going to be usual zombie creatures, but both Tebo and screenwriter Andy Greskoviak were receptive to taking their initial ideas even further than they had initially imagined. "I know Casey and Andy were always open to us coming in and going a little crazy with their initial ideas. Then, Casey had this idea about if the creatures had these weird octopus-like beaks on them. We didn't want them to look like a bird, but we can play around with all these otherworldly elements because of what these creatures are, so where can we take that? We all just kept coming up with ideas and bounced them back and forth, and throughout the sketching process, all these ideas morphed into what you see in the movie."

Like many others, Kurtzman found himself sidelined during the pandemic, with Black Friday being his first project back in the mix of things on set. While he was thrilled to return to the makeup trailer, dealing with new precautions and other limitations did present a few challenges for Robert, his crew, and director Casey Tebo.

"Because Black Friday was our first film with all these protocols and restrictions, it was a little frustrating at first for everyone," Kurtzman recalled. "Not only are you wearing a mask, but you've got your face-plate shield on too, and every time you breathe, it's steaming up and you can't see your actor at all. It was driving me nuts, but now we've done it on four or five shows, so I've gotten used to it. But we were basically off for six months until Black Friday started up, and that was our first show with the COVID protocols. We had to take COVID online training courses and things like that with our union and basically look at all the protocols. I'm a neat freak and clean freak anyway, but in makeup, we clean everything all the time anyway. So all of this was a no-brainer for us, with just a few new additions to our routines."

"There were challenges, though. There were a few instances where we had to use a bit of movie-making magic to get some of those bigger scenes there because we couldn't have more than five or six people at a time in a shot because of COVID. We all had to stay separate from each other during production, so we couldn't have a hundred people on set. There were scenes where it looked like a lot of people were coming through the store, but in reality, it was maybe like five or so people in each of those shots. We did some shots outside, but even then, we only had maybe ten or fifteen people. But they did these plate shots so that they could move those ten or fifteen people around to make it look like a bigger group of people. Casey had to be strategic about setting up the action, making it look busier than we could really make it, which all worked out really well."

While Kurtzman had nothing but good things to say about his time working on Black Friday, there was one thing that made the whole affair even more special for him — his son, Louie Kurtzman, played the role of a new sales associate who ends up having the worst first day working in retail when he becomes infected and transforms into one of the infected, lurking around the store in search of new victims.

"My son, Louie, plays Emmett, the guy who goes through all the stages of transformations. He's an actor as well, and he's got this certain type of build, and so I've been using him in a couple of different projects lately because he's very thin and great to do makeups on because of his body type. We basically had like six stages of designs that we would lay out on Louie's photograph, and we already had his body cast and his head cast, so that made it easy to jump right in and start working on his character." 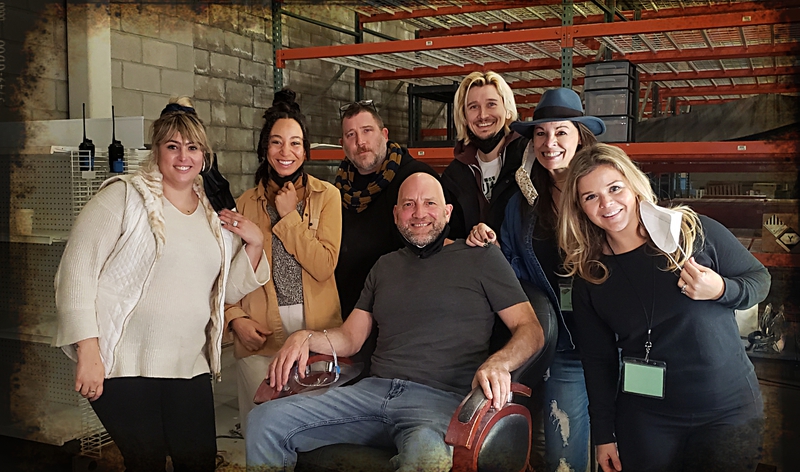 "But it was fun for me to work with him because I knew he was going to be amazing and that he has a really good understanding of stunt work and the physicalities of a creature, too. That's why I keep using him. I used him in this other show called First Kill we just did for Netflix. He knows how to walk like a creature would walk, and there are so many times you get an actor who doesn't connect with that kind of work, and effects guys hate that. We love guys who are suit performers, who know how to move and to make it look like a creature without making it look stupid. And he's one of those guys, so it was very cool to get to work with him. I had so much fun working with him on it," Kurtzman added.

While Robert is keeping busy on the effects side of things these days, he does hope that one day soon he'll be back in the director's chair and has a few things in the pipeline, waiting for the stars to align so that he can give horror fans more cinematic nightmares to enjoy. "I definitely will direct again soon. I have multiple things in the works, but I really love doing effects, so I guess I don't put the pressure on myself to just direct or not. I'm comfortable with the process that it takes to get a movie off the ground, even if it takes forever, so I don't put that extra stress on myself when I feel like something's got to happen now. Luckily, I have this to fall back on as my day job, but if I just wanted to direct right now and that's all I wanted to do, and that's all I was focused on, and it didn't happen as fast as I wanted it to, then it's just extra stress. It'll happen when it happens, and I got a lot going on, but I'm not going to worry about it until it happens. And it's also about relationships. Sometimes the person that's going to make your movie, you haven't met them yet. You might meet them on another film or a film down the line, and then you work well together, and then everything evolves from there."

Black Friday is now playing in select theaters, and available on-demand November 23rd. Check out the trailer below: