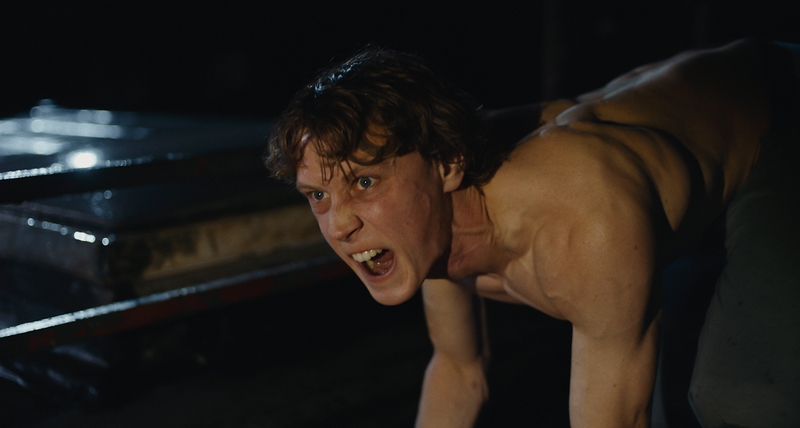 Director Nathalie Biancheri sat down with FANGORIA to talk about authenticity among species in her sophomore film WOLF. WOLF follows the story of Jacob (George MacKay) as he navigates a clinic for people with species dysphoria and the psychologist/zookeeper who torments them with cognitive-behavioral treatment.

As a writer, I'm always interested in how you researched and at what point you say, "All right, enough. It's mine now." Can you walk me through that creative journey from lightbulb moment, into the research wormhole, and into your own creation?

The most important thing is that I did quite limited research. After I heard of species dysphoria, there was a news piece about a woman who felt she was a cat. I found that really interesting, so I started looking into it, but I didn't want to make a film about this condition in our contemporary world. In that sense, I would have had to investigate it in real terms. Where it came from, whether people did feel like they were animals, and not having species dysphoria myself, I didn't want to go there in a journalistic sense. I thought: what has attracted me to this subject? And I realized it was the overarching theme of identity, but identity in a two-fold way.

On the one hand, what would it mean to really, deeply, truly, with every limb and every brain cell, feel like to believe you were an animal? How would you exist with that? How would you function in the world? Could you renounce it? Could you not? That struggle, I thought, was very interesting to explore.

But also, I thought, what if you don't necessarily think with every fragment of yourself that you're an animal, but have rather chosen to embody an animal? Be a parrot? Be a German Shepard? And why? What about our society might push you to want to choose that for an identity for yourself? Do we struggle with this colloquialized, capitalized world in which we're constantly at ends with loneliness and technology? Do we need to be seen?

Those two questions or pillars were both interesting. And I didn't have an answer for them. So, I put them in a world with a clinic that aims to cure this and different elements of a syndrome that does really exist, but which I explored through the questions I wanted to ask of the world we live in.

That's a great answer. I remember in the film, the psychologist (whom the panda calls "the zookeeper") gives several reasons why the patients have this species identification disorder. For example, trauma or longing for social connection, and he boils it down to the fact that they resort to animalistic behaviors when they feel something they can't process. I understand that. I don't identify as an animal, but I definitely get that connection of, "I know how this would be handled in the animal world."

It seems though that the characters with species dysphoria exist on a scatter plot. Some of them choose it. Some of them don't, so much. It seems like Cecile, Rufus, Judith all fall on the side of "this is how I process," but Jacob is different. He stands apart because it's very intrinsic for him. He fights that instinct. Is that a line you drew intentionally?

One hundred percent. I'm glad you picked up on it. A hundred brownie points.

I wanted to be very open-ended; there's not that much room in an hour and thirty-eight to explore as much as you would want to, and also the necessities of cutting this film and having such a hermetic, isolated, insular character like Jacob forced me to limit other characters. That duality and tension between Jacob and the other patients was more inherent to the original material, and perhaps was lost slightly in the film. I'm glad that you saw that because I think [species dysphoria] can be read only as one thing, but I don't think it is. Everyone has a very, very different story. Their relationships to themselves and their identity are so individual. You were right to group the others because they do struggle with similar issues, and Jacob is completely different.

It's really interesting the way they respond to the treatment. The zookeeper forces Judith to back out of her identity as a parrot, whereas, when he tries to force Jacob, Jacob says, "No, I don't want to be a wolf." And from a creative standpoint, having the protagonist identify with the wolf evokes some werewolf vibes. But, that mythology is really different: Jacob doesn't turn into a cryptid, there's nothing to do with the moon phases… was werewolf mythology something you had in mind?

No, it wasn't! It was a bit of an oversight! My popular culture is, like, zero. I can't even tell you why I chose a wolf. Or a duck, or a squirrel. Wildcat is a bit easier because there's something touching about a very human girl who really has taken on this idea of being a ferocious wildcat, but if anything, she's a domestic cat. She is completely institutionalized and has an owner, in fact. 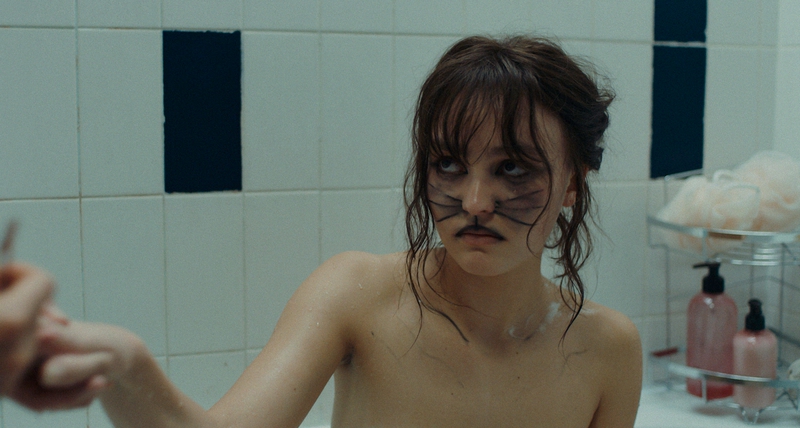 That's a really interesting relationship between Cecile and her owner. It made me uncomfortable in a way that seemed very intentional. I'm a person who doesn't really identify much with animals at all, but one of the most beautiful parts of the film to me was hearing Jacob's journal entry about how he feels like he's in the wrong body read aloud to him… to embarrass him. That one scene has so many layers: the zookeeper is reading it aloud to embarrass him, but hearing it makes the viewer empathize with Jacob more. The writing itself is very sensory. Can you share any insight about the making of that scene?

The journal entry changed. I had written it, originally, in the script. And as I've always said very clearly to George, "I don't know your character, really. He will always be a mystery to me, until you inhabit him, and we discover him together."

George took that task very seriously and really, really discovered this character. Honestly, it was a constant process of unraveling. There was a genuine discovery. He wrote his own journal entries. He drew the wolf at the beginning of the film. That was him. He drew like one hundred versions. He was so precise. He was so authentic, and I think that made the character really authentic. He wrote those journal entries, and I was like, actually, this is more truthful than what I've written. So we're gonna go with that.

When I wrote it, he was more angry. His wolfish instincts came out. When we started talking about the conflict, though, he wouldn't be angry. This is a moment between him and himself. Aside from the obvious empathy we'll have for anyone who is so clearly humiliated, what's touching is that he is so touched hearing those words. It's such authentic pain. The zookeeper is touching on his dilemma: ultimately, he's thinking, "I am a boy." That is his issue: he is a boy. He's a wolf, but he's a boy. It's heartbreaking. 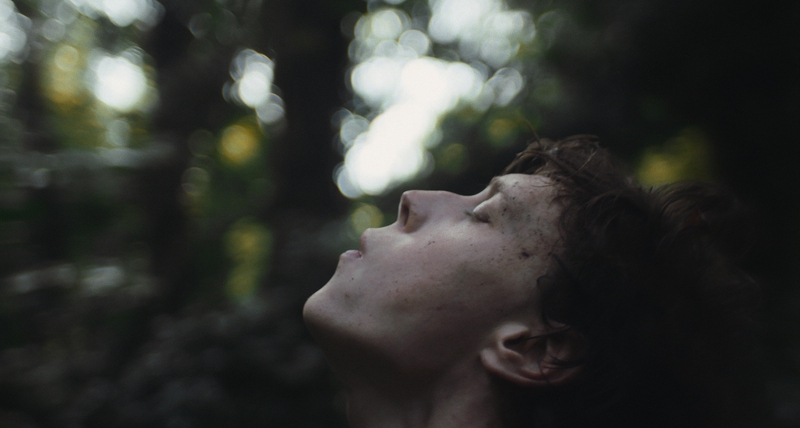 The connection with the wolf self to the human form…the movement is spectacular. I read that Terry Notary was the coach. It's wonderful and perfect. In particular, the scene where Jacob crawls down the hallway. It's so transfixing, everything from the physicality of the shoulder blades to the camera angles to the light when he jumps on the railing to howl. How did you do that? How did you get it so perfect? Was it easy? It didn't look easy.

No, nothing is ever easy. There were a few elements to create that scene. The lighting. There's a Portuguese director I really love, Pedro Costa, extremely niche, arthouse. He uses chiaroscuro a lot, but in Vitalina Varela, [he has] the most magnetic characters coming in and out of the shadows, and I was suddenly like, this is perfect. I have to make this boy without special effects feel intrinsically like an animal. I have to really figure out everything that could be in my favor. So, one thing was shadow, light, mood; and the other was how to film it.

We initially thought steady cam might work, and when we did the screen test, I just felt it was so wrong. Using an artificial movement was taking away from the fact that you have to believe in something organic. The most natural [method] felt that either we were just still, and let him move into [the camera], or go very intensely handheld and close, which we used as his wolf emerged more.

Something I learned through trial and error—and my DP is so wonderful because he is so devoted to the craft and finding what's right for the story—was that we couldn't be artificial. If I'm artificial as a filmmaker when trying to capture these animals [on film], then we're never going to feel authenticity. And authenticity will make or break a film like this.

Right. The whole film is about authenticity, so it makes sense that it would be imperative to you in every aspect. I have enjoyed this conversation so much, and thank you so much for talking to us about WOLF.

Such great questions. Refreshing to answer.

Thank you so much. Can't wait to see what you do next!

Watch WOLF directed by Nathalie Biancheri, starring George MacKay and Lily-Rose Depp, in theaters December 3. This interview has been edited for clarity and brevity.