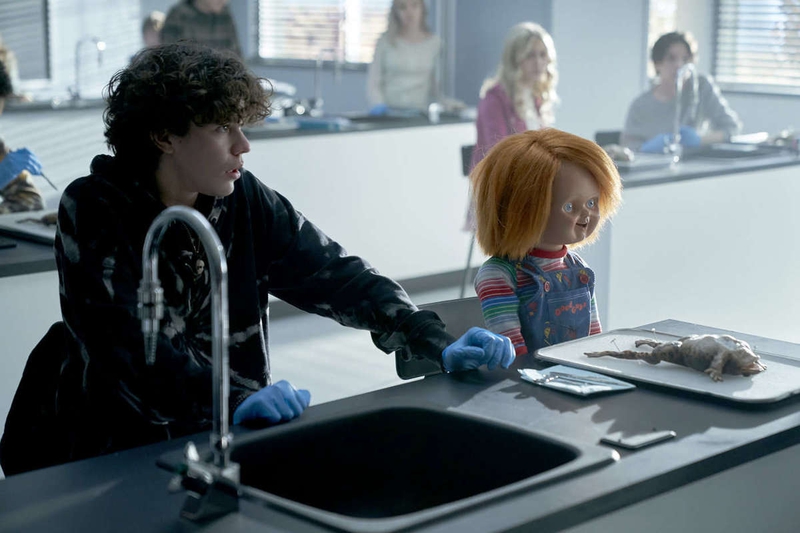 Over three decades after Don Mancini introduced the world to Chucky, the orange-haired murder doll in 1988's Child's Play, the man is finally bringing his sinister creation to the small screen. And given the fact that he's got seven movies' worth of material behind him, it's clear Mancini — and Chucky — have their work cut out for them.

The SYFY and USA series, which stars Zackary Arthur, Devon Sawa, Lexa Doig, Tao Briones, Alyvia Alyn, Lind, Jennifer Tilly, and of course Brad Dourif, continues the story from 2017's Cult of Chucky. FANGORIA was able to preview the first four episodes of the series and, if they're any inclination, fans are in for a treat. The show takes things back to the slasher basics of the first three installments while keeping the flash and humor of the last four.

Mancini and the cast were on-hand during the 2021 Television Critics Association Summer Tour to give us the low down on what to expect from the show. To get you primed and ready for the series premiere, here are six things you should know about Chucky.

Tilly, who reprises her role as Tiffany, Lee Ray's former fiancée, in the new series, agreed: "I've been, for the last 30 years, saying to Don, 'Oh, we should have an origin story,' because I thought it would be really nice to kiss Brad Dourif. You know, Tiffany and Charles Lee Ray as actual people. And then it's funny how things work out because in the show, they have an origin story, but it's with two younger actors. But I think the fans are going to be very excited about that."

There will be blood. Lots of blood.

The main sticking point for the Child's Play franchise fans making the jump to television may be the concern that it won't fully deliver the gory goodness. But, by the looks of things, the blood will flow. And freely. In fact, according to Tilly, the production had a crew entirely devoted to that exact task. "We have a whole blood team on the show," she said. "I'm telling you, there are a lot of people on this team. The Blood Team."

It's worth noting that, while this is Chucky's first foray into the small screen format, Mancini has been playing in this sandbox for a little while now. And when it was time to develop the series, it was hugely important for him to retain two specific aspects of the franchise: "One of which is the gore," he said. "The other of which, of course, is Chucky's propensity for dropping f-bombs."

Mancini previously worked as a writer on both Hannibal and Channel Zero, and said of his experience, "I was shocked and kind of encouraged and excited to see how the boundaries could get pushed." Those two projects, like this one, exist under the NBC Universal umbrella. As Mancini explained it, SYFY and USA assured him during the original series pitch that "there would be no compromise in these departments." 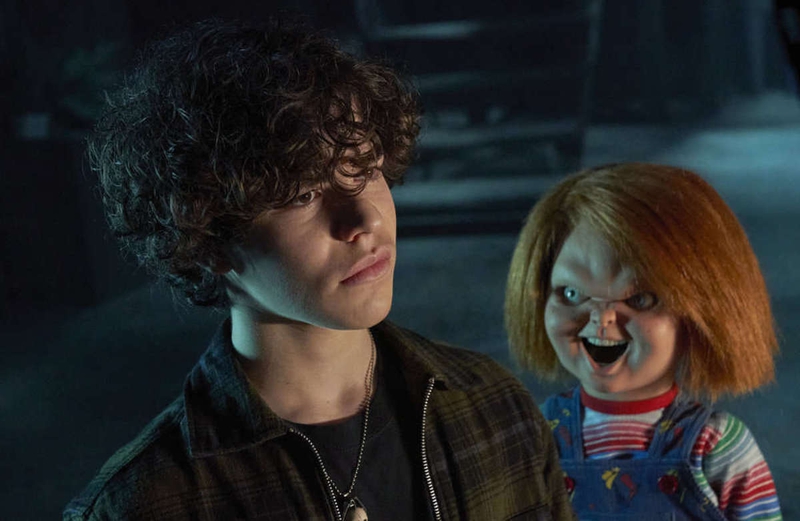 There's a coming-of-age love story at its core.

Instead of terrorizing a boy like Andy Barclay (Alex Vincent) — been there, done that! — Chucky befriends 14-year-old Jake, who continually struggles to fit in at school and home. He regularly falls victim to nasty forms of bullying and never receives the approval or understanding of his father. And yes, he's gay.

Mancini acknowledged the character, and some of his story, mirror his own formative years as a gay kid trying to find where he fit in. Finding a way to put a gay spin on the series didn't just give him a sense of closure; it also provided Mancini a chance to take the coming-of-age love story trope and twist it, just a bit.

"I was saying to Don when I read it, even without Chucky, it's just such a beautiful coming-of-age movie," Tilly said. "I mean, you kind of don't even need Chucky because the relationship between Zackary and the other kids is, really, just you're rooting for him. You want to know where it goes. But then Chucky, of course, complicates things."

Three decades of one-liners, gruesome kills, and shlocky humor, and one thing we've never gotten in a Child's Play movie is Halloween. Meaning, of all the seasons when Chucky has committed murder, it's never been during the quintessentially spooky one. Well, move over Michael Myers. It's Chucky's time to shine.

"For this season of the TV show, one of the things I was really excited about with the show was presenting Chucky at Halloween," Mancini revealed. "We'd never done that before." Differing itself from the cold, sterile, mental hospital feeling of Cult of Chucky, Mancini explained they amped up a "luxurious and glamorous autumn look" in the new series, which became the main look and feel of the show.

"Between that and some really beautiful actual drone footage from the air that we got last fall in the environs where we shot the show outside Toronto," he continued, "it looks like a Halloween horror movie as directed by Dario Argento or Brian De Palma. At least, that was our goal."

Some familiar faces will show up.

This Chucky isn't a remake (unlike the 2019 Chucky movie, which was definitely a remake). To really drive this point home, Mancini and crew did their best to weave in elements of the previous movies to tie things together. And that means, aside from Tilly's Tiffany, there will be a few familiar faces coming back.

"In the second half, Fiona Dourif comes in, Brad's daughter, who played Nica in the [Cult of Chucky] movie," Tilly revealed. "And then Andy Barclay, Alex Vincent's character, comes back. And Christina Elise [who played Kyle in Child's Play 2 and Cult of Chucky]. And, so, it just really -- it goes bonkers from this point."

Honestly, you had us at "bonkers."

"Things get inside you, and they mean something," Brad Dourif said, plainly. He's provided the voice of Chucky since the very beginning. In short: he is Chucky. As Dourif has grown older and the franchise evolved from standard slasher fair to campy horror, his representation of everyone's favorite Good Guy Doll has changed slightly over the years.

"You know, my voice is changing," Dourif continued. "I'm getting older. I'm 71. I have to constantly adjust for how my voice is. Originally, Chucky was from Chicago, and so I had a Chicago rasp and so forth. Now, he's, oddly, kind of moving more toward New

Jersey; I wonder why? But, basically, I go to Cult and I listen to Cult and I mimic the voice before we shoot. And then, you know, Don schools me."

The first two episodes of Chucky are now streaming on SYFY and USA with new episodes every Tuesday, at 10 pm ET/PT.