THERE'S SOMEONE INSIDE YOUR HOUSE: An Interview With The Filmmakers And Stars Of Netflix's New Horror Movie

You are your own worst enemy. 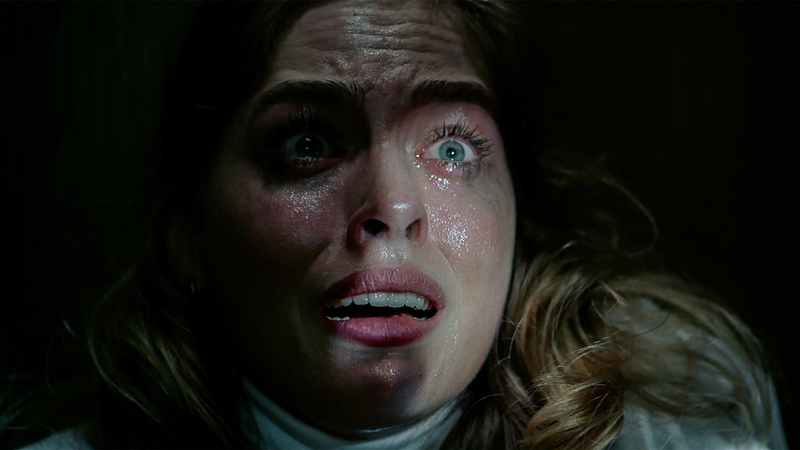 THERE'S SOMEONE INSIDE YOUR HOUSE (2021)

The high school setting and slasher movies go together like peanut butter and chocolate in Reese’s pumpkin cups this time of year— they’re a perfect compliment to each other. The “Golden Age” of ‘80s slasher movies inserted high school teenagers into all-kill situations where they partied, banged, and made stupid decisions before they ultimately caught an ax to the head. Said teenagers were stereotypically so annoying, crass, and unlikable that audiences cheered on their grave fates. And then the ‘90s (read: Scream) brought in a new era of high school slashers that featured a little more character development, a lot more self-awareness, and made empathy for its teenage victims look cool. Flash forward to 2021, Neflix’s There’s Someone Inside Your House— based on Stephanie Perkins’ novel of the same name— shares a similar depth, possesses a cool premise, and adds in some very contemporary social commentary, yet never neglects the meanness that makes a slasher, well, a slasher— and it works like a charm.

The hook: When Makani Young (Sydney Park) moves to small-town Nebraska to get away from her past, her friends and classmates at Osborne High are gruesomely hunted down by a killer donning a mask of each victim’s face, (à la you-are-your-own-worst-enemy) threatening to expose their darkest secrets.

“I was drawn in (from) the very beginning,” star Sydney Park (Makani) told Fango during a recent press junket. “I read a lot of scripts, and I can usually tell if I like it, and if I respond to the writing within the first two or three pages. I loved the whole feeling it gave me.”

With its memorable opening sequence, quippy dialogue, and even a kill nod to Drew Barrymore’s dangling corpse, There’s Someone Inside Your House viewers will immediately see the influence of the aforementioned Scream franchise, which, yes, was totally director Patrick Brice’s (Creep, Creep 2) intent when planning for filming. “Scream was definitely a movie that was on my mind when I read the script,” Brice explained. “It always had a place in my heart.”

Yet, Brice didn’t want House to feel like a carbon copy of a movie from almost twenty-five years ago— freshness was key to connecting with modern slasher audiences. “In re-watching it (before shooting House), there’s obviously aspects of that film that are timeless, but for me, the thing that really made it feel new and fresh at that time was that level of self-awareness that it has, (but now) made it feel outdated to me. That self-awareness was in our script (but) I felt very free in that I was able to take inspiration from that and also, ideally, have these rich, complex characters with their fears and reactions to these kills that are happening…There’s this added layer of ‘Is my secret going to be revealed to the entire town?’” (The secret-exposing theme feels especially integral in an Internet age where, all of us, not just teens, forget that deleted tweets, screenshots, or any other “secret” conversations can always be saved and later revealed to incriminate us, I should add.) “Hopefully, that was something that made things a little more grounded and connected audiences to the characters.”

And that’s a big part of the captivation. The friend group, consisting of Park’s Makani, Alex (Asjha Cooper), Darby (Jesse LaTourette), Zach (Dale Whibley), and Rodrigo (Diego Josef), feel like authentic Gen Z kids navigating high school in the year of our lord 2021 (or at least as authentically as this thirty-something writer would assume). “We’re not the stereotypical ‘dumb teenagers’ where the killer’s coming towards us, and we’re running towards the killer,” Cooper laughed. “A lot of the decisions we make, other people would make under the same circumstances.”

For Brice, authenticity came in the form of “naturalistic performances,” crediting Netflix for allowing the cast to be made up of who was truly best for each role, and not necessarily who was the most well-known. “I was really grateful that Netflix let us cast actors who weren’t necessarily that well-known, and who had interesting faces, and had a vibe where they were fully able to inhabit their characters and play off each other in a really natural way,” Brice explained. “That’s another thing that I think differentiates this from other slasher movies— when it’s not a slasher movie, it’s a ‘hang out’ movie with these kids.”

And when the kids aren’t hanging out, they’re being brutalized and outed for things such as white supremacy, hazing, bullying, and flat-out shittiness. One kill involves a church, a confessional, and a hate speech— something that would only piss off the wrong people and will fill everyone else with glee. When asked what he’d say to the crowd that whines horror movies have gotten “too political,” screenwriter Henry Gayden is unsympathetic. “What are you talking about? They’ve always been political!” Gayden laughed. “The early slashers are obviously very conservative. You’ve had sex— let’s kill you! This girl hasn’t, so she can survive. It’s always been in the bones of horror movies. That’s what (Director Brice and I) wanted.”

“That’s one of the things that I was taken with [in] the script— it felt contemporary,” Brice added. “It felt completely willing to go there, but also, at the same time, not be patting itself on the back with it or giving a huge wink to the audience. That was something that was built into the DNA of the material, without hammering the audience over the head with it.”

Along with low-key political undertones, horror movies have always embraced women who knew how to fight back and/or final girls, and Park’s Makani can be added to that category. “I think we all have inadequacies and secrets and traumas that have happened to us,” Park said. “[I can relate to] her navigating high school, this first love, and then dealing with killer(s) and all of these questions. I put myself in her shoes. So I journaled [sic] as her; I created a playlist for my character (consisting of Nirvana, Tupac, Lauryn Hill)…and a backstory for Makani— personal, intimate things that only she would know.” When asked which women in horror she’d compare Makani to, Park named Halloween’s Laurie, Scream’s Sidney, and The Shining’s Wendy, especially when reflecting on some of the “grueling” shoot days and critical fight scenes needed for her character. “That level of exhaustion really adds to the story. You can see it; you can feel the angst, like, ‘No, I’m actually struggling right now,’” Park laughed.

Struggles aside— getting to the really important stuff— how are the kills?

“The kills are vicious,” Darby’s Jesse LaTourette told me, laughing. “There is one kill, without disclosing too much, that was so shocking that I think I had to turn away for a moment! It was so extreme.”

Diego Josef concurred: “I think the kill that opens up the movie is when I realized, ‘Oh, this is a gory film.’” And he would know. His character Rodrigo comes face-to-face, with, well, the killer donning his own face— a “weird” thing to witness on set. “I wasn’t expecting it to be so detailed,” Josef said. “A month or two before we started shooting, they brought me to this place where they do a bunch of molding for the big cinematic movies like Marvel and DC, and they scanned my face, and I saw that 3D image on the screen, and a month later I came back, and they had it 3D printed out. It was all white, and then they had an artist come in and detail it/color it. It was a really nice collaboration between the tech company and the makeup artist.”

A certain cast member I spoke to (who shall not be named in fear of spoilers) cited Christian Bale’s performance in a certain Psycho-tic role as a major influence. And, also like Bateman, this killer is complex and multi-layered, as House is just as much of who-is-the-behind-the-mask as it is a straight slasher.

“We wanted the killer’s motivation, when you find it out, to be earned in their character, and not some greater point about the world,” Gayden said. “But it did say something about certain people…that I will not name (laughs).”

There’s Someone Inside Your House drops October 6 on Netflix.