The Drink Takes The Man: Alcoholism And Recovery In THE SHINING And DOCTOR SLEEP

Examining two of Stephen King's works and their adaptations through the lens of recovery. 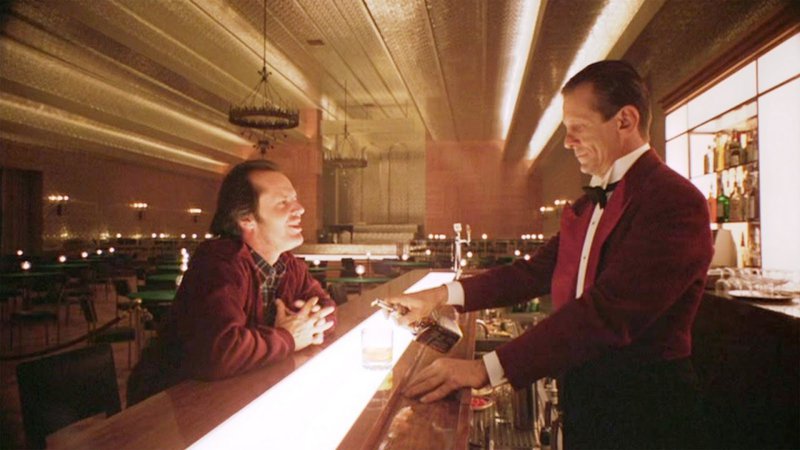 Jack Nicholson and Joe Turkel in Stanley Kubrick's THE SHINING (1980).

I recently read someone call horror “the empathy genre,” and I think that’s why it’s such a relatable tool to explore human experiences, from grief (Ari Aster’s Hereditary) to broken relationships (Midsommar, another Aster joint) to racism (Jordan Peele’s Get Out) to female coming of age (John Fawcett’s Ginger Snaps). Alcoholism and addiction are another topic horror has explored from multiple angles, and it’s compelling to see these struggles depicted in any genre, but especially horror. So I asked my best friend Ashley Christine, a writer based in Los Angeles, to share their thoughts and insights on horror's depictions of alcoholism. They offered a powerful description of their connection to the topic:

"Imagine being possessed by an invisible force. You can’t see it, but you feel it. It lives inside your head and talks to you in your own voice. And all it wants is for you to feed it. But the food it wants is poison to you. It’s not so bad at first; the poison causes a state of euphoria. But The It inside you is never satisfied, and always wants more. Soon you’re devoting your time, energy and money to making sure The It stays fed. You start doing self-destructive things, putting yourself in dangerous situations, taking unnecessary risks, all in the name of feeding It. It tells you to isolate, to ignore your friends and loved ones, to neglect your own health and well-being. The things you loved are no longer as important as It. It has taken complete control of your body and mind. And no matter how hard you try and fight, you are completely powerless against the unseen, invisible and hungry It."

They continue, "Sounds like the plot of a horror film, but what I just described was my personal experience with alcoholism and addiction. In the throes of untreated addiction, I really did feel like I was being compelled by a supernatural force. Something that had moved in and was causing total destruction to my mind, body and life. Thankfully, like in any good ghost or possession movie, my life got better when I called in the professionals, the same way the Warrens are called in to deal with hauntings in The Conjuring series. In recovery I was able to get the help of people who were experienced in dealing with the same invisible force. I’ve been sober for five years now."

Two of the strongest examples that confront this invisible force in horror are Stanley Kubrick’s The Shining and Mike Flagan’s follow-up Doctor Sleep. In 1977, now-recovering alcoholic Stephen King wrote The Shining, a horror classic that powerfully confronts alcoholism and its corrosive effects on a family. He famously disapproved of the Stanley Kubrick adaptation, but there’s no denying that it’s become a classic film.

When I read The Shining after years of watching the movie, I was struck by how closely the Torrances reminded me of my own family. Like Danny, I was the only child of an alcoholic father, and the disease tested my family in numerous ways over the years. Happily, my father has now been sober for several years (The Shining also happens to be one of his favorite films.) King’s novel addressed Jack’s struggles with drinking honestly and humanely, so it’s understandable that he took issue with Kubrick’s relegating that theme largely to the background. The book’s Jack is also a good man corrupted by the Overlook Hotel’s evil power, which preys on his weaknesses, whereas Jack Nicholson’s take on the character seems nuts from the word go. But the real horrors of alcoholism still resonate even in Kubrick’s heightened Gothic. The sight of a bruised and traumatized Danny (Danny Lloyd), and Shelley Duvall's Wendy exhibiting instant fear that her husband has abused him, along with Jack’s toxic mixture of rage and self-loathing as he battles a compulsion he can’t control – all of these speak to the real effects of alcoholism on both those who suffer from it and the people they love.

“Watching The Shining through the lens of alcoholism actually addresses one of the criticisms, that Jack seems irrationally nuts from the start,” Ashley observes. “Wendy says that Jack hasn’t had a drop of alcohol in five months. It is heavily implied that Jack quit cold turkey, which means he’s what is known as a ‘dry drunk’ – someone who’s stopped drinking but is not treating their underlying addiction with a recovery program. (I know this is directly at odds with the information we’re given in Doctor Sleep, but I am applying a pure text interpretation to The Shining.) Alcoholics use alcohol as a means of emotional regulation to dull overwhelming uncomfortable feelings; if the alcohol is taken away without any means of learning new ways to emotionally regulate, you get someone who, well, seems fucking nuts. Of course, Jack is nuts at the beginning of the movie! He hasn’t had a drink in five months! Dr. William Silkworth, an early proponent for the disease model of alcoholism, describes alcoholics as ‘restless, irritable and discontented, unless they can again experience the sense of ease and comfort which comes at once by taking a few drinks’ and boy, doesn’t that describe Jack Torrance to a T? When we meet him, he’s a pulled rubber band ready to snap. Which, as we know, he does, in spectacular fashion.”

Ashley also finds resonance in a scene I never would have connected to the alcoholism aspect of The Shining: the famous moment when Jack encounters a ghost in room 237.

“That scene beautifully embodies the horror of addiction,” Ashley explains. “At first, she’s a beautiful naked woman whom Jack embraces joyfully; then suddenly mid-kiss, she turns into a horrifying, rotting hag, putrid and laughing. Emotionally it is similar to how alcohol first appears to the alcoholic: a lovely and beautiful panacea that can fix all ills, then, somewhere along the line it shifts into a hideous poison that destroys your mind and body.”

39 years after The Shining, Mike Flangan’s criminally underseen Doctor Sleep pulled off the neat trick of adapting King’s sequel to his Shining as a followup to Kubrick’s. As a result, the alcoholism that Jack’s grown son Danny (Ewan McGregor) deals with is a much more prominent element.

“Doctor Sleep addresses so many elements of addiction/alcoholism in such a nuanced and specific way,” Ashley says. “It is very clear Stephen King is drawing from his own experience to make a unique piece of art.”

I felt this especially in a moving scene in which Dan gives a speech to his AA chapter on the occasion of his eight year anniversary of sobriety. He holds a chip that is familiar to me from my father. Dan talks about the “drinking and the temper and the anger, those things in me were his” and how getting sober has allowed him to know and appreciate his late father in a new way. He mentions Jack having been in AA, “wanting to get well for me and my mom,” and having only hoped to someday reach the eight-year milestone Danny has now achieved. The pride Danny feels in his own accomplishment, the one he wishes he and his father could have shared, reminded me of the pride I feel in my father’s milestones.

Speaking of AA, Ashley enthuses that, “I love how the relationship between Halloran and Danny mirrors that of a ‘newbie’ in a 12-step program and a sponsor, which is someone who guides the newbie through the 12 steps and shares their own experience. After completing the 12 steps with a sponsor, the former newcomer may choose to become a sponsor, and the process goes on. Halloran is someone who has experience dealing with the powers and pitfalls of ‘The Shine’ and teaches them to Danny. Danny then does the same with Abra.”

It’s interesting, then, that the movie depicts AA both literally and metaphorically, making Doctor Sleep’s portrayal of alcoholism rich and multifaceted. Again, Ashley’s perspective as a recovering alcoholic allows them to intuit something I wouldn’t necessarily have connected to the topic myself.

Ashley singled out one scene in particular that spoke to them while watching Doctor Sleep. “The standout scene for me is when Dan meets his father [Henry Thomas], who has assumed the role of Lloyd the bartender,” they say. “Dan’s description of what it would cost if he took a drink is a truly powerful moment, one where he is faced with his personal inner demons and overcomes them. I was also struck when Jack refers to the glass of whiskey as ‘medicine.’ It reminded me of a saying I’ve heard in recovery: ‘First, alcohol was magic. Then it was medicine. Then it was misery.’ Which sums up my drinking experience. Sadly, Jack still thought of alcohol as medicine, even when he was causing misery for his family.”

The synthesis Flanagan achieves between King’s humanistic storytelling and the grim Kubrick interpretation of The Shining results in a film that is infinitely more hopeful than Kubrick’s. Whereas the 1980 film ended with Jack absorbed into the Overlook Hotel, with no hope of redemption, Doctor Sleep shows Dan, even in death, as a survivor and a force for good, there for Abra whenever she needs him.

Ashley agrees: “In the way that The Shining shows the damage of untreated alcoholism, Doctor Sleep shows the healing power of recovery.”