Guillermo Del Toro On CRONOS, Criterion And Other Creatures

An archive interview from The Gingold Files. 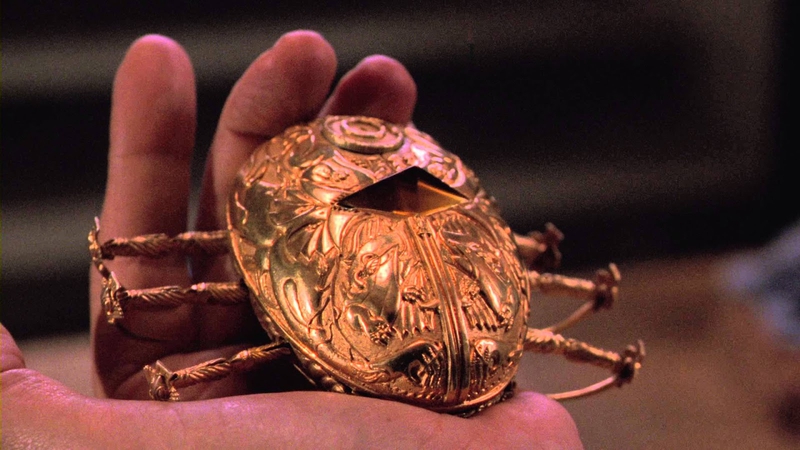 Editor's Note: This was originally published for FANGORIA on November 22, 2010 and we're proud to share it as part of The Gingold Files.

Guillermo del Toro has been extending his creative abilities in numerous directions lately, developing and consulting on a number of new features in both live action and animation. In between all this activity, the genre giant found time to oversee new Criterion disc releases of his 1992 debut feature Cronos, and gave Fango the details on that project as well as updates on some of his other movies.

Criterion’s updated DVD and Blu-ray debut of Cronos mark both an update and an improvement on the previously issued Lionsgate DVD, starting with a fresh high-definition transfer. “[Cinematographer] Guillermo Navarro and I went back to the original elements,” del Toro tells Fango, “and it’s the most beautiful the movie has ever looked in any medium; it’s even better than seeing a film print. We shot new on-camera interviews with Guillermo, [co-star] Ron Perlman and myself, and there’s behind-the-scenes footage included with those interviews. And we did a peculiar little extra called ‘Welcome to Bleak House,’ which is a tour of the house that I call my man-cave, where I keep my whole collection. And then we added a really good gallery of stills and photographs, a lot of personal stuff and preproduction art from Cronos.”

The discs additionally include the pair of commentaries (one by del Toro, the other by the producers) first heard on the Lionsgate DVD, plus one more unique extra: the director’s short film Geometria, shot in 1987 but never completed to his satisfaction until now. “I was finally able to finish it for these discs; this is the first time ever that it’s going to be seen in its proper form,” del Toro says. “It’s a really gory and crazy little movie, done in the style of Dario Argento/Mario Bava/color-saturated horror. You guys actually saw it back in the days of STARLOG; I sent it in to the final CINEMAGIC contest [sponsored by that long-defunct magazine], and you sent me back a handwritten letter saying that you guys had liked it. It was not a finalist, it didn’t win any prize, but you liked it, and I still have your letter!”

The release of the Criterion Cronos discs reps the culmination of a long-held desire for the filmmaker: “We’ve been trying to do this for years, and we basically waited until the rights became available again to be able to do it properly with Criterion. I met [the company’s] Peter Becker at Telluride back in 2001, and we’ve talked about doing Cronos since then, because a Criterion edition is the ultimate release for any film.” So will we be seeing more collaborations between del Toro and Criterion? “I would hope and pray,” he says. “I would love nothing more. Obviously I’m a big proponent of it, and I do hope we find a way to, at the very least, release the other Spanish-language films I’ve done.”

The story of an elderly antiques-shop owner (Federico Luppi) who discovers an ancient device that turns him into a kind of vampire, and is coveted by an evil industrialist (Claudio Brook) and his sadistic son (Perlman), Cronos was a noteworthy achievement as a first film and still holds up perfectly today. Revisiting the movie for the new discs gave del Toro a fresh appreciation as well: “I fell in love with it again,” he says. “It had been a long time since I saw it, and I watched it with my wife and we were moved very much, because it was like revisiting a family album. I found it really endearing, and brimming with ideas that were almost like a time capsule of where I was when I was young. I shot that movie when I was 26 or 27, and it came out when I was 28, so I was really a kid, and I was quite taken by how it’s so full of those ideas.”

Del Toro has had plenty of vehicles to express his creativity lately; in addition to the features he’s got in the works as a producer and his next directorial ventures, At the Mountains of Madness and Frankenstein, he has also been consulting on and developing animated movies for DreamWorks, including the current hit Megamind. While we couldn’t help noticing a certain similarity between the titular villain’s fishbowl-topped sidekick and the dome-headed Johann Kraus in del Toro’s Hellboy II: The Golden Army, the filmmaker notes, “I came in at the very end when they were shaping up that movie, advised them on reorganizing some of the editing and came up with ideas for a couple of little bits. I was really taken by how great and collaborative the spirit was in reshaping the movie a little. I had a blast. I’ve really longed to be able to do animated films, both as producer and director, because it’s an area where you have control over texture and color and shape in a way you don’t get in any other medium.”

One of the most promising animated projects on his slate is Rodrigo Blaas’ feature version of his creepy, award-winning short Alma. Given that it deals with a young girl experiencing strange and threatening phenomena, Alma especially seems right up del Toro’s alley. “Absolutely,” he laughs. “I did find a lot of empathy with that. The funny thing is, I saw it and contacted Rodrigo, but not to turn the short into a full-length movie. I was talking to him about directing a different animated film for DreamWorks, and he was the one who proposed it to us and said, ‘I wanna turn this into a feature,’ and he came to us with a pitch. And I wanted to support him on that.”

Another del Toro picture with a preteen female protagonist is the Don’t Be Afraid of the Dark remake on which he served as a writer and producer, with Troy Nixey at the helm. Like his fans, the filmmaker was crushed when the movie got bumped out of its announced January 21 release slot, due to the pending sale of distributor Miramax by parent company Walt Disney Studios. “No one was more disappointed than us,” he says, “because we’d been screening the film and it was getting terrific responses from audiences, and so did the 10 minutes we screened at Comic-Con. But now it’s in the hands of the new owners of Miramax, and we are working with them and they’ve been very friendly and accommodating and giving us praise, but they haven’t found a distribution partnership yet. So it’s in limbo right now, but we hope it gets to theaters soon. I really can’t wait to release it into the world.”

Just last week, it was reported that del Toro and Battlestar Galactica’s David Eick are teaming up to bring The Hulk back to TV for ABC. And bringing up that comic-book hero leads to the question that must be asked once again: Will we be seeing a third in his Hellboy series anytime in the foreseeable future? Del Toro says that’s up to Perlman, who has expressed reluctance to return in the heroic title role. “You know, seven-hour makeup sessions per day get a little rough,” he laughs. “But there’s a website called Den of Geek in the UK that started a petition to get Ron to do a third Hellboy. And I must say that it got thousands of signatures, and Ron was very moved. We had lunch the other day, and Ron said to me, ‘You know, if you write it, I may do it.’ We got a very strong ‘maybe’ from the man!”