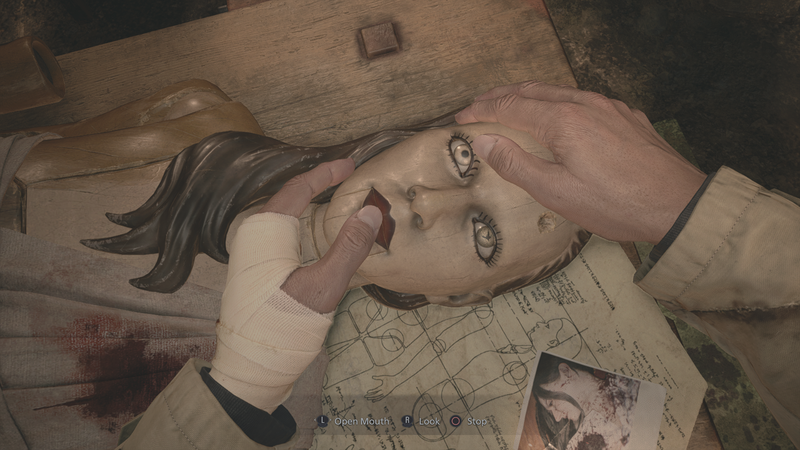 A scene from House Beneviento in RESIDENT EVIL VILLAGE.

Mutation has always been at the heart of Resident Evil, and not just in the misshapen foes you encounter, their DNA twisted into monstrous forms by bio-weapon viruses. From the very first entry in 1996, which revealed a high-tech research lab gone awry lurking beneath the cobwebbed gothic mansion that opened the game, sudden shifts in location and tone are the bloody bread and butter of the franchise.

Even so, 2017’s Resident Evil 7 still caught most fans off-guard. Ditching the third-person action that had defined dozens of earlier sequels and spin-offs in favor of a more immersive first-person viewpoint, the game also dropped players into a scenario that was in stark contrast to the super-cops versus mad scientists yarn fans had been conditioned to expect. You were now Ethan Winters, a hapless everyman searching for his missing wife in a rotting Louisiana swamp that owed more to grungy backwoods slasher movies than anything previously bearing the Resident Evil brand.

Of course, that game had its own whiplash midpoint plot twist and the story picks up in Resident Evil Village. Ethan and his wife have relocated to Eastern Europe, and now have a daughter called Rose. Before you’ve even made it through the intro movie, things have gone to shit again and Ethan is once again searching for a missing family member in a creepy location.

That location is the unnamed village of the title, already in ruins when Ethan stumbles across it. Infested with werewolves, and a handful of possibly helpful survivors, the village is a hub area you’ll return to again and again, with different pathways out of it opening up as you gather keys and other objects. Each in turn leads to a distinct area ruled by one of the four lords, essentially self-contained horror vignettes that must be experienced in sequence before plunging into the game’s bewildering finale.

While the top level details are familiar, much else is not. If Resident Evil 7 took its early influences from grimy '70s exploitation movies like Texas Chain Saw Massacre and The Hills Have Eyes, Village looks instead to that decade’s slew of anthology horror films. The village is ruled over by four very different “lords,” all of whom report to the mysterious Mother Miranda. Straight away, you know you’ll be tackling each lord on their home turf, tackling them in a climactic boss fight before moving on to the next. 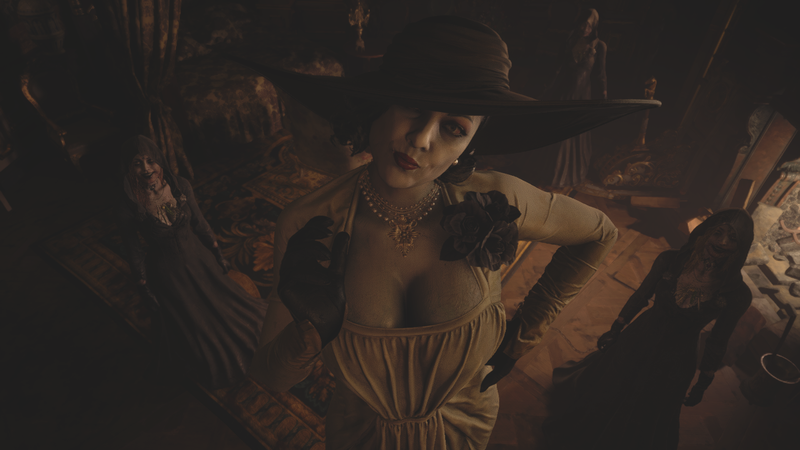 If you’ve been following the game online, you’ll no doubt be aware of Lady Dimitrescu, the vampire giantess with knives for fingers whose luxurious castle is the first main gameplay area you’re funneled towards. It’s a superb introduction to the game, a gorgeously designed and intricately mapped building full of secrets. The story conspires to take you all over it, from dank basement dungeons to snow-blasted rooftops, with ornate courtyards and handsomely furnished libraries and drawing rooms in between.

You’ll want to spend hours poking around in this compellingly realized space, but Dimitrescu and her three daughters mean you’ll only ever do so cautiously. Dimitrescu herself roams the corridors and hallways, chasing you should you catch her eye. You stand no chance of defeating her, so evasion is your best option. Any time you spy her across a landing or hallway, striding purposefully from room to room hunting for you, it makes your blood run cold. Her daughters, though more easily defeated once you learn their weakness, are no less terrifying. Able to transform into swarms of flesh-eating flies, you’ll die more than once at their hands until you solve the mystery of their origin.

Despite the jarring nature of the tonal shift from previous titles, the things you’re expected to do will be more familiar. Ammo must be found and hoarded. Every room you need to visit will be locked, and opening the way ahead requires navigating arcane systems of locks based on statues, masks and seals that seem utterly impractical, but are devilishly fun to piece together. 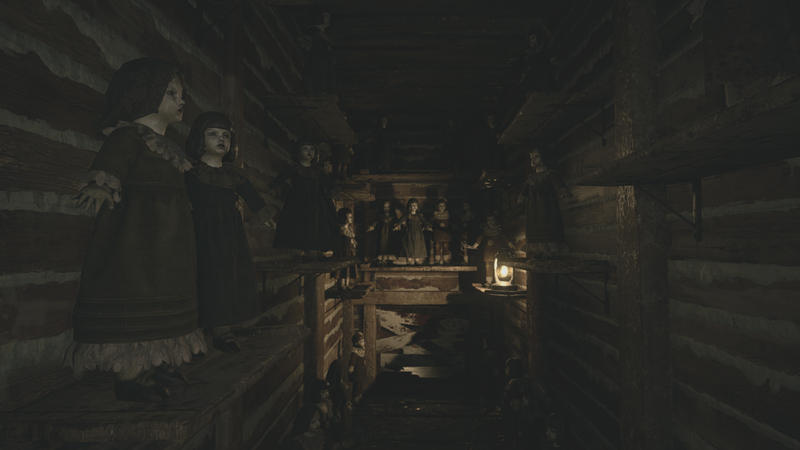 Your time in Castle Dimitrescu feels like an entire game played out in miniature, but ultimately represents maybe 20% of the entire Resident Evil Village experience. After that you’ll venture to House Beneviento, where things take another hard left turn. Stripped of your hard-earned weapons, this haunted dollmaker’s home eliminates combat entirely, taking on a more adventure game cadence as you investigate objects, solve puzzles and, in one memorably horrifying sequence, hide under beds in order to escape.

These two sections of the game set a high benchmark for horror fans that, sadly, the rest of the game never quite reaches again. Past the halfway mark, Resident Evil Village becomes steadily more action-oriented, the locations become more videogame-generic, the enemies never as sinister or original. It’s never less than fun – the game is too polished and sumptuous in its imagery for that – but for FANGORIA readers in particular, it’s a very front-loaded affair. By the later stages, which could easily come from a Wolfenstein or even Call of Duty game, the horror aspect has taken a definite backseat.

When the game does get gory, it does so in exuberant style. Ethan already suffered hilariously over-the-top injuries and amputations in the last game and that trend continues here. Fans of hand trauma are well served by a near-constant procession of mangled digits and lopped-off limbs, almost all of which are immediately fixed with a splash of the game’s magic health juice. He’s basically the Wile E. Coyote of horror games, but if you find this a stretch too far then there is an explanation of sorts towards the end of the story. If you’re paying attention to every dialogue and reading every note you find, it’s here in the final garbled sprint to the finish line that you’ll find the easter egg info that ties these new games back to the old Umbrella Corporation storylines in a broad strokes kind of way.

Longevity comes from a generous array of secrets to find, including powerful new weapons and artifacts that can be sold to The Duke, the game’s corpulent roving trader, in exchange for cash with which to buy more gear to keep you alive. These secrets are sometimes hidden in plain sight, simply locked away behind doors to which you eventually find the key, or dropped down wells and retrieved using a crank that must be found by thorough exploration. The most valuable are dropped by defeated boss characters, or earned by solving frustrating mechanical mazes located in each of the core gameplay areas.

Add in a crafting system that lets you turn scavenged scrap into more ammo and health kits, as well as recipes that grant permanent health benefits if you can hunt and kill the right animals, and this is a survival horror game where scarcity is rarely an issue. For purists, that will likely be the biggest deviation from the series’ norm of all. Those who want to feel outgunned and vulnerable should turn the difficulty up high and rely on their knife like the old days.

Resident Evil games have always walked the line between inspired brilliance and frustrating clumsiness, and that remains true for this eighth official core entry. Some sections feel horribly unfair, springing instant death booby traps on you or failing to make it clear which enemies are invulnerable to your attacks for story reasons until it's too late. Movement can be slow and gluey, which sometimes trips you up when the situation demands nimble footwork and a speedy escape. It certainly doesn’t help that the opening sections are so vividly memorable and the later sections rather predictable. If the areas were able to be visited in a different order, that push to the end might not feel like quite the slog it sometimes does.

All that would be to ignore the fact that, taken as a whole, this is still a constantly entertaining horror romp and one that offers more for the genre fan than usual. It’s the most overtly supernatural of the series, and takes open inspiration from Hammer Horror, H.G. Wells, '80s cult hits like Dolls and Puppet Master, Lovecraft and more. At one point it literally takes a boss monster from the 2013 indie horror movie Frankenstein’s Army. It never manages to combine this smorgasbord of influences into a coherent story, but then that feels very much on brand for the series. If it made sense, it wouldn’t be Resident Evil. With so much going on, you’ll inevitably enjoy some parts more than others, but by shifting tone every few hours it ensures that at the very least you’ll never be bored.

As with all media these days, you’ll want to stick around for a post-credits scene which suggests yet another sharp turn for the series in the inevitable Resident Evil 9, before you’re given the option to dive back in for another playthrough with some of your advantages still unlocked. There’s also a high score game for those who complete the story, as well as the separate multiplayer game, Re:Verse. There’s a lot, basically.

Any horror fan should definitely give Resident Evil Village a try. It is by far the weirdest, craziest entry in the saga for many years, and one that will especially delight those able to pick up on the multitude of genre references and tropes being gleefully deployed. Sprawling, spectacular, often very, very silly, it’s nothing like the previous games, and yet also Resident Evil to its core.