SCREAM 3 Was Once… Better?

How scenes left on the cutting room floor could have helped make this entry (a little closer to) killer. 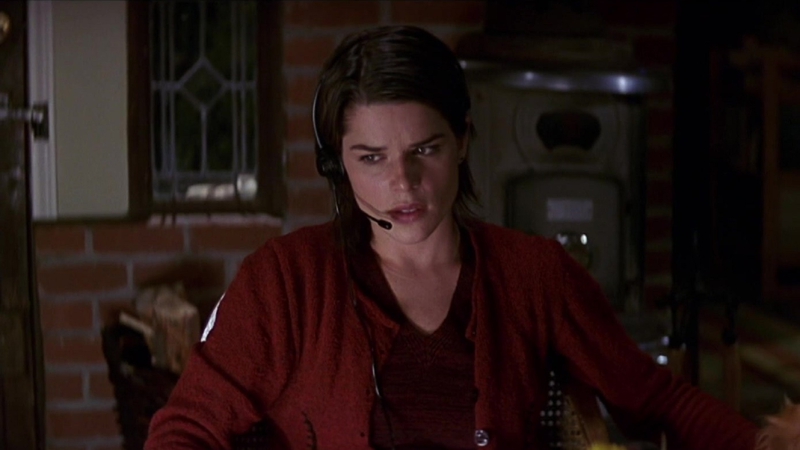 Later this week, millions of Scream fans will finally be able to add a new entry to their obligatory rankings, something that once seemed unlikely due to both the underwhelming box office of 2011's Scream 4 and the 2015 death of Wes Craven, who had helmed all entries. Who would dare make a new film without him, especially since ticket sales seemed to prove fans had moved on? But despite its box office misfortunes, Scream 4's popularity has grown over the years, with some (not me) claiming it's actually the best sequel. That renewed interest has kept the franchise afloat, enough for Paramount to snap up the rights and - thankfully, instead of a remake - press forward with a fifth entry, which reteams the core cast of Neve Campbell, David Arquette, and Courteney Cox (and yes, of course, Roger Jackson as the voice of Ghostface) for yet another adventure in Woodsboro.

This weekend, and time itself, will tell if it was worth the effort, but with word of mouth being strong, it seems unlikely that Scream (2022) will end up at the bottom of many fans' rankings (having seen it, I assure you that it certainly isn't at the bottom of mine). And so, with respect to those who say otherwise, 2000's Scream 3 will continue to generally be considered the low point among the five films. While it performed well enough at the box office, critics weren't as enamored as they were with the first two, and word of mouth didn't help it the way it did the original (which was a sleeper hit, for those too young to remember or watch it unfold for themselves). Again, it has its defenders, as all films do, but general consensus is that Scream 3 lacked the same wit as the previous two, with Ehren Kruger's script (stepping in for Kevin Williamson, who was too busy at the time to commit in full) seeming to favor Jay and Silent Bob cameos and showbiz in-jokes over the first two films' clever homages to slasher films of yore. In short, it wasn't as much of a horror film with humor anymore - it was a comedy with a few scares tossed into the mix.

Luckily, I'm not here to trash the film; I've done that enough over the years. Instead, I'm here to tell you that once upon a time, the film was better than it ended up being. No, I don't think there was ever a way to completely salvage it from some misguided ideas (the dream sequence, oof), an abundance of characters who never seem like reasonable suspects, and the decision to have a solo killer that rendered the mystery falling flat. But having gotten to see some earlier cuts of the film, it's clear that there was more robust character material that ended up being excised, and I believe that, had some of it been included, the film as a whole would have fared better. Or, at the very least, Parker Posey wouldn't usually be the only thing its defenders have to point to as a reason to justify its existence. 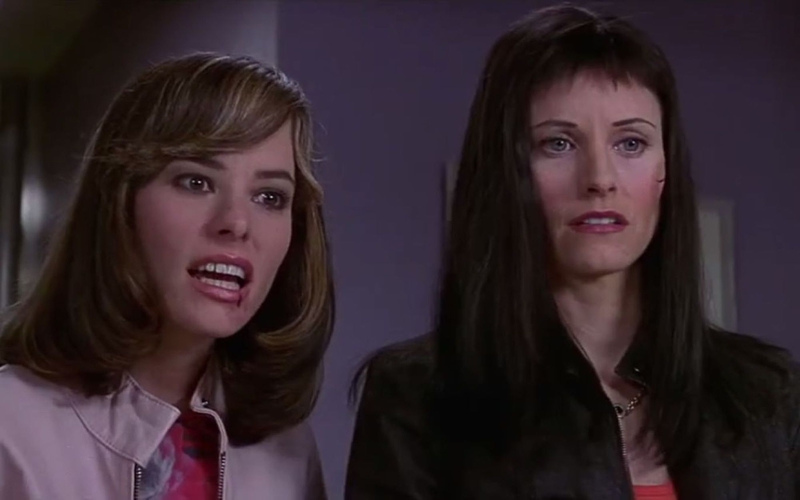 The biggest reveal in these older cuts is that the creative team was out to give Dewey and Gale their time to shine. As any astute fan knows, Neve Campbell's availability was stretched thin for this entry, as she was working on another movie (Drowning Mona, which is great! Seek it out!) and the final season of her show at the same time, which is why Sidney barely interacts with the other characters even after she returns from isolation. This even results in the curious fact that Roman unmasking himself is also the first time Sid has ever actually met him, which doesn't exactly make for as strong a reveal as "her boyfriend" or even "her new buddy from college." To make up for this, earlier versions of the film gave Cox and Arquette more to do (Gale is even re-introduced before Sidney, which in my opinion plays stronger), only to whittle down these moments for the final version as if to try to hide the fact that the series' main star was largely peripheral to this one's story.

Losing some of this material, the story seemed more slipshod than it already was. For example, when Dewey proposed to Gale at the end, it was a sweet moment that mirrored the stars' then-real life marriage - but it wasn't really earned in the film itself. In the final cut, the two spent most of their scenes together bickering and shared few emotional moments that would even suggest rekindling their relationship, let alone advancing it. This wasn't always the case; in fact, the seeds were once planted in Gale's first scene, when her publicist tells her that a cop is there to see her. In the final version, the scene instantly cuts to her meeting Mark Kincaid (Patrick Dempsey), who informs her of Cotton's death, but there was once a beat in between where Gale lights up after being told about the visitor, clearly hoping it's her former flame. "Dewey's Theme" even plays as Gale approaches a tall man who is being obscured in shadow, only to be disappointed to discover it's someone else; an unguarded reaction that tells us that Gale does indeed still care about him, and isn't just saying so to get what she wants.

We also get more about why they once again broke up, some more flirting, etc., in particular later in the film, when Roman has the two of them tied up and goes off to pursue Sidney. This scene is pretty quick in the final version: Dewey just unties himself somehow, frees Gale, and off they go. It was probably cut down for pacing (it IS set during the climax, after all), but a much longer version has the two of them working together to free themselves, with some cutesy dialogue (Gale, referring to Dewey's efforts: "Faster, Dewey, to the right!"; Dewey: "Seems like we never broke up!") and finally a hungry, passionate kiss between the two when he races over to her side. Other little moments, sometimes just a line or a look, are present throughout these earlier cuts (their café scene adds a quick bit where Gale remembers how he likes his coffee), and honestly, every single one of them would have helped make the movie stronger on a character level. There was no real saving the mystery, in my opinion, but as a showcase for two of the series' three main characters, who always have to play second fiddle to Sidney, it could have been a standout, bangs notwithstanding.

There are other things that went by the wayside, including alternate versions of the opening where Cotton is murdered - at one point the killer even grilled him, Casey Becker-style, on horror movie trivia by asking him the name of Stephen King's famous killer car (Cotton guesses "Carrie" and "Cujo", heh). One dropped scene (which was mentioned on the DVD/Blu commentary by Craven, producer Marianne Maddelena, and editor Patrick Lussier) shows Ghostface, wearing his costume despite being alone, making his voice changer discs, which is even stupider to watch than it is to describe - it's almost insane to think they went so far as to shoot it. There's even an alternate version of the scene with Randy's sister, featuring a different actress entirely (I couldn't identify her), named "Posey" instead of Martha, and this version also has Randy riffing longer (nothing you'll miss, though he does note he believes Mickey is the killer, heh). Unsurprisingly, there isn't much more with Sidney, as they wanted to use every bit of Campbell's footage that they had, but she does spend a little more time in her isolated cabin before deciding to head to Hollywood; there's even an added jolt where she is startled by her father arriving with his weekly grocery delivery. 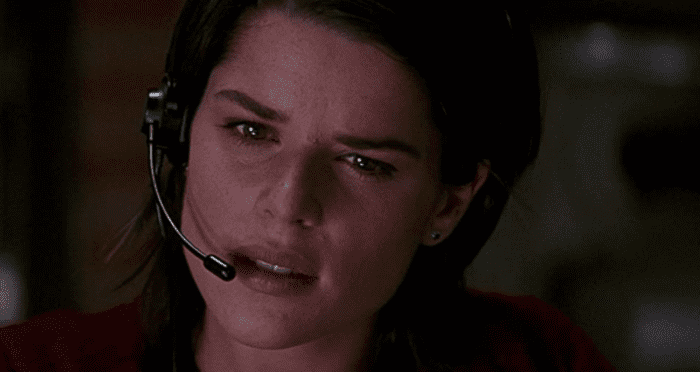 In Padraic Maroney's It Began With A Scream, the behind the scenes contributors (Lussier, 1st AD Nick Mastandrea, producer Stuart Besser, etc) all seem to agree that Scream 3 was made without the same passion that drove the first two, with morale driven down even further by a script that was constantly in flux due to meddling from certain real life monsters that may have inspired Lance Henriksen's John Milton character in the first place. So there's no one to directly blame for coming up short in this or that area, but it is interesting and kind of sad to know that despite all of the production woes, they had the elements to make it a little stronger than it ended up being, only to second guess themselves and keep the focus on Sidney as much as possible. Without getting into spoilers about the new film, I'm glad the series was finally able to free itself from anchoring the entire thing around her - it's just too bad that the makers of Scream 3 ultimately didn't have as much confidence that it would work.