Acts of heroism are simultaneously always acts of monstrosity. 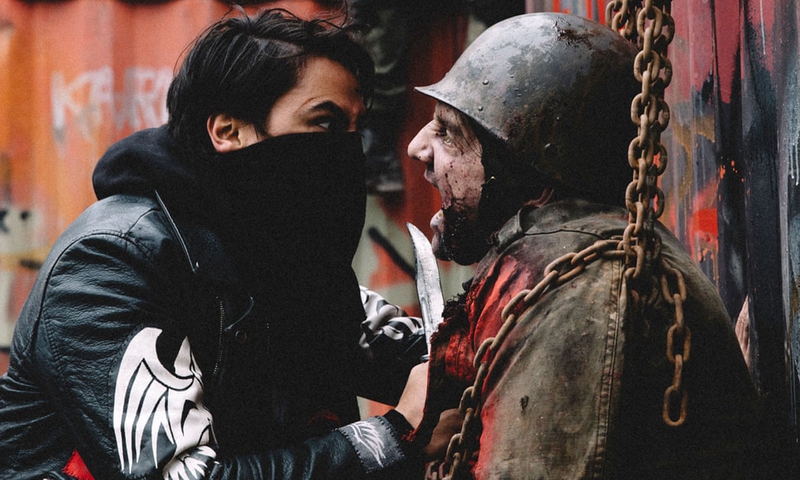 Dr. Robin Coleman writes in Horror Noire: Blacks in American Horror Films from 1890's to Present of the advent of short ethnographic films in the late nineteenth century- Native Woman Coaling a Ship at St. Thomas (1895) and Native Woman Washing a Negro Baby in Nassau (1895), for instance- projects that, as their titles suggest, don't just objectify their subjects, but transform them into "curiosities," "oddities," akin to "animals in a zoo." Coleman goes on to describe how such portrayals of Black and Native life would become "a mainstay in horror over the next century, particularly in films which depict Blacks as savage, deadly natives (e.g. Black Moon [1934])."

The term "settler horror" was first coined by Eve Tuck and C. Ree in 2013's "A Glossary of Haunting." It's the type of language that, when first encountered, felt deeply familiar- signified instantly- primarily because a great deal of American horror is, in fact, settler horror: horror that reflects the fears and anxieties of the settler-colonial imagination. They take note of the overrepresentation of the narrative structure known as the Hero's Journey in colonial storytelling, and how "preoccupied" these stories are "with the hero, who is perfectly innocent, but who is assaulted by monstering or haunting just the same," a point Alicia Elliott echoes in her 2019 essay on "The rise of Indigenous horror."

The implicit innocence prescribed to the heroes of such stories is of critical significance to Tuck and Ree precisely because it serves to reflect "the triad" of "settler-colonial relations," comprised of three intersecting figures: "a) the Indigenous inhabitant, present only because of her erasure; b) the chattel slave, whose body is property and murderable; and c) the inventive settler, whose memory becomes history, and whose ideology becomes reason." They take note of how "we, the audience are meant to feel outrage in the face of haunting…are beckoned to root for the innocent hero, who could be us, because haunting is undeserved, even random," an observation that reveals how within this relational design, horror derives primarily from "the presumed injustice that a monster or ghost would tamper with the life of a decent person." Grace and decency are prescriptively naturalized to fall along lines of whiteness, while monstrosity and villainy are prescribed to that which "threatens" whiteness through mere existence: Blackness and Indigeneity.

The ongoing project of settler colonialism, therefore, is described by Tuck and Ree as "the management of those who have been made killable" (the Indigenous inhabitant and chattel slave, also referred to as "once and future ghosts" to articulate social death). As a result, they conclude that "settler horror…comes about as part of this management, of the anxiety, the looming but never arriving guilt, the impossibility of forgiveness, the inescapability of retribution." It is, again, an expression of the monster as cultural technology: one that has been foundational to the development of film as a medium, even before it was treated as an art form. While Tuck and Ree point to The Shining (1980) and Poltergeist (1982) as evidence of settler horror, a great many films- some considered canonical- could be discussed in the same context. Ingagi (1930), King Kong (1933), Voodoo Woman (1957), The Amityville Horror (1979), Cannibal Holocaust (1980), every iteration of Pet Semetery, Candyman (1992 & 2021), and The Witch (2016), for instance, all position their settler subjects as heroes whose encounters with either overt or coded representations of Indigeneity and Blackness come to be associated with experiences of terror—or rather, as the occasion of The Swallowing. Centuries' worth of storytelling can be surmised by this formula…and then came Blood Quantum. 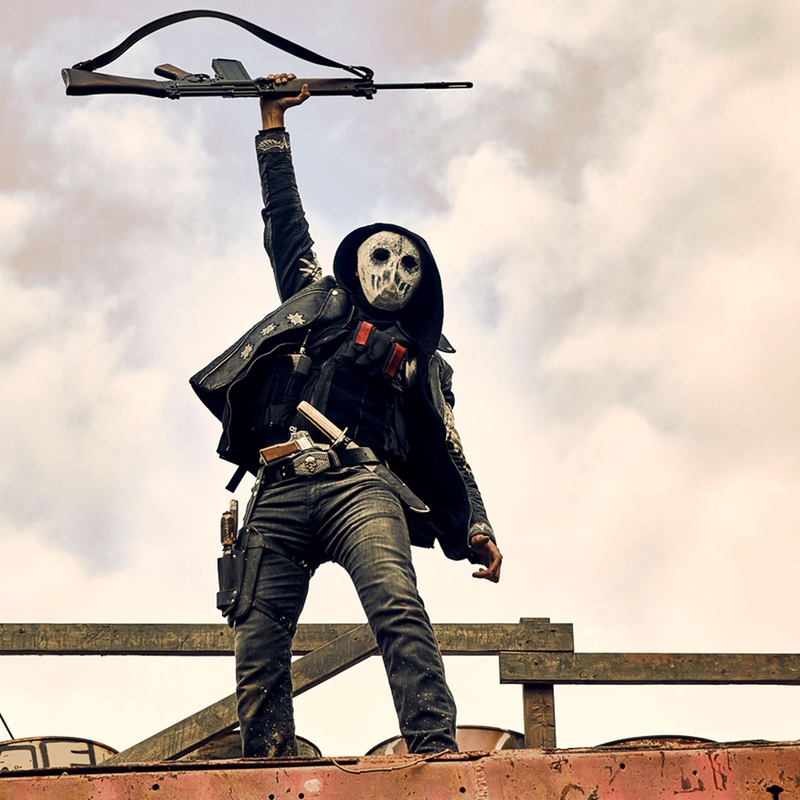 Jeff Barnaby's paradigm-shifting 2019 film is to Indigenous horror what Get Out was to Black horror (if not in commercial success, then undeniably in spirit). Conceived of and created by a Native crew and starring Native actors, Blood Quantum was filmed at the Kahnawake and Listuguj Mi'gmaq reserves in Quebec and took inspiration in part from the 1981 raids on Listuguj executed by the Quebec Provincial Police. It is both an incredibly standard zombie movie, and utterly unique; it doesn't just subvert tropes or refuse the white gaze, but is actively antagonistic toward it, first evidenced in the film's epigraph, attributed to an "ancient settler proverb." The truth that gets lost in white audiences and white creators' propensity to solely understand themselves as "heroes" and horror as arising from confrontation with monstrous Others is the historical fact that they have been the deadly diseased zombie horde clamoring at the gates—not the other way around.

Blood Quantum is the reflection of this history. In the film, the Red Crow Reservation's sheriff, Traylor (Michael Greyeyes), and his father, Gisigu (Stonehorse Lone Goeman) barely bat an eye when white people start taking bites out of everything from live chickens to Traylor's son, Joseph (Forrest Goodluck). More disturbing, at least at first, are the animals: the salmon and dogs that won't stay dead, the dissolution of natural laws as they've always been known. These disruptions are set against competing familial conflicts: Joseph's sympathetic allegiance to his outlier brother, Lysol (Kiowa Gordon), whose tragic personal history fosters in him a profound rage, as well as the unplanned pregnancy of Joseph's white girlfriend, Charlie (Olivia Scriven).

Quickly, the dissolution of natural laws leads to the dissolution of state, and you might say human law, as parallels are drawn between "being bitten" and the chaos brought upon Natives in too-close proximity to whiteness. The objective, "don't get bit," is another way of saying don't get too close, the real-life anxiety of which teeters into spectacular horror when Traylor comes upon a white mother devouring her newborn, her Native partner out of his mind with a combination of drugs, grief, and disbelief.

The film's events are cut by a six-month time jump, during which a complete reversal of power takes place amongst the still-human. Indigenous folks not only have immunity against the virus but have kept the res safe from invasion. The same lines that once spelled marginalization (the reserve, akin to an animal reserve) now protect them, but also render their home desirable to desperate white "townies." Charlie— now very pregnant- wants to grant settlers entry while Lysol is vehemently against it. Gisigu, Traylor, and Joseph fall in between, inclined to extend empathy so long as strict safety measures are taken, a stance that enrages Lysol. "One of them could come in here and infect this entire camp. It takes one, Traylor. And Joseph's pet townie keeps dragging them in here."

The conflict is an echo; a reproduction of what must be innumerable past arguments because— as Tuck, Ree, Elliott, and Jeff Barnaby himself have emphasized- Indigenous people have already faced apocalyptic viral outbreaks intended to bring about genocide and the decimation of culture and society. In conversation with Ariel Fisher for Fango, Barnaby describes having "[represented] colonialism as it happened…we empowered Native people and we had them literally debate onscreen about whether or not they should basically relive colonialism. The very concept of the premise is, 'if we let these white people into our community, they may literally eat us all.'" 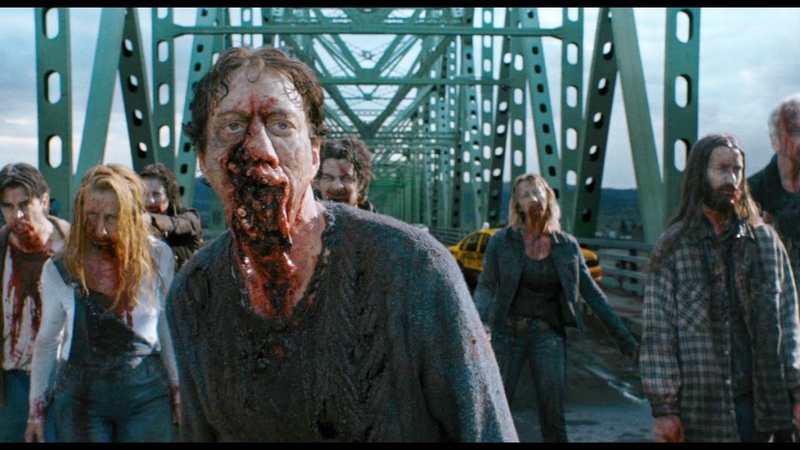 I've written before about whiteness and the eroticism of homosocial cannibalism as it appears in white-led, white-created queer horror films. Blood Quantum is also overtly preoccupied with this subject, but because it privileges and centers an Indigenous lens, the eroticism prescribed to cannibalism in films like The Neon Demon, Jennifer's Body, and Raw evaporate. Where tension in these films is created through the conflation of sexual desire and bodily consumption- the act of eating, treated as a dual act of self-creation— the tension in Blood Quantum doesn't so much surround the question of if cannibalism will happen, but when and how because, again, this has already happened.

Tuck and Ree's articulation of the social death experienced by Black and Indigenous peoples that render us "once and future ghosts" is particularly interesting as it pertains to Lysol, his rage, and the destruction it begets. As a character, he's perhaps most closely related to Killmonger (Black Panther), swallowed and spit back out by the system that defined this newly collapsed empire, and now his family— the same family that failed him— wants to let the monsters back inside. Jeffrey Jerome Cohen's first thesis on monster theory attests that "the monster's body is a cultural body," meaning monsters are always a reflection of the culture that produced them, an observation equally true of hero-protagonists. Lysol is interesting because he reflects both.

He holds a mirror to the distinctly un-magical aspects of postcolonial Indigenous existence, is an irreverent misogynist, describes himself as "not someone to look up to." In many ways, he embodies the rageful ghost that terrorizes the settler colonial imagination, and because we're socialized to fear what whiteness fears (because white people's responses to fear are themselves terrifying), there's an impulse to see him as villainous. But he is also one of the only characters to practice any real discernment; to see the world as it is rather than as we wish it were. Barnaby recognizes that the "history of Native people on screen" has been to "[play] the villain, because the truth was too hard to swallow." In Blood Quantum, white people are The Swallowing, but so are the heroes, because in real life, acts of heroism are simultaneously always acts of monstrosity.