Get Your Own Custom STRANGER THINGS Vecna-Defeating Playlist

Spotify is putting its algorithm to fun use.

As far as algorithms and major platforms go, Spotify does tend to at least give us the most fun tidbits here and there with the data they've mined. Our daily soundtracks are some deeply personal stuff. Personal enough to pull one out of an Upside Down Vecna trance, and that's... pretty damn powerful. Kate Bush's 1985 single "Running Up That Hill" is enjoying much more than a resurgence thanks to its use in the latest Stranger Things installment. The song is the anthem of the season, playing throughout but most importantly— it's used in a pivotal moment, [spoiler alert] pulling Max out of the Upside Down just as she is dangerously close to succumbing to Vecna. Since the season debuted in late May, "Running Up That Hill" is tearing up the charts in a way it never did in 1985.

This month, the track became the most-streamed in the world, reaching number one on both the Spotify charts in the UK and the US after earning 57million listens in just one week. And I believe it, I know at least one listener in the top 5% of streams, and if that constant play doesn't even break the top five, I can't imagine how many hours the top 1% are streaming! "Alexa play 'Running Up That Hill' for 24 hours straight.'"

I recently asked you all what your Vecna song would be. The music that would reach down into your soul and pull you back to life from the Upside Down. Now Spotify is doing the heavy lifting for you, and creating a custom Upside Down playlist tailor-made to your personal streaming sensibilities. Click here to get yours.

wanna know what songs would save YOU from vecna? head to your Upside Down Playlist on @Spotify to find out
🎧 the first Song on the list = your savior song 🎧

Here's a deeply personal peek at mine. (I'll show you mine if you show me yours!) While this wouldn't be my first guess, Ronnie Spector slaps, and her vocals on "Be My Baby" feel like ascension, so this checks out. 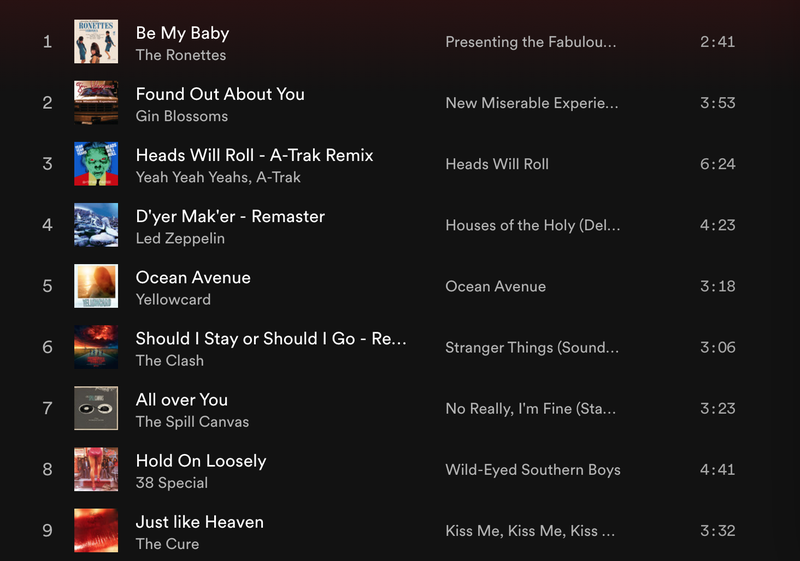 Now go get yours and show me over on the socials! The most fun use of the algorithm goes to: Spotify. Hands down. Mine my data, but make it fun at least! Stranger Things 4 Volume 2 starts tomorrow.