Ripping the lid off the pretense of normalcy in del Toro's take on noir. 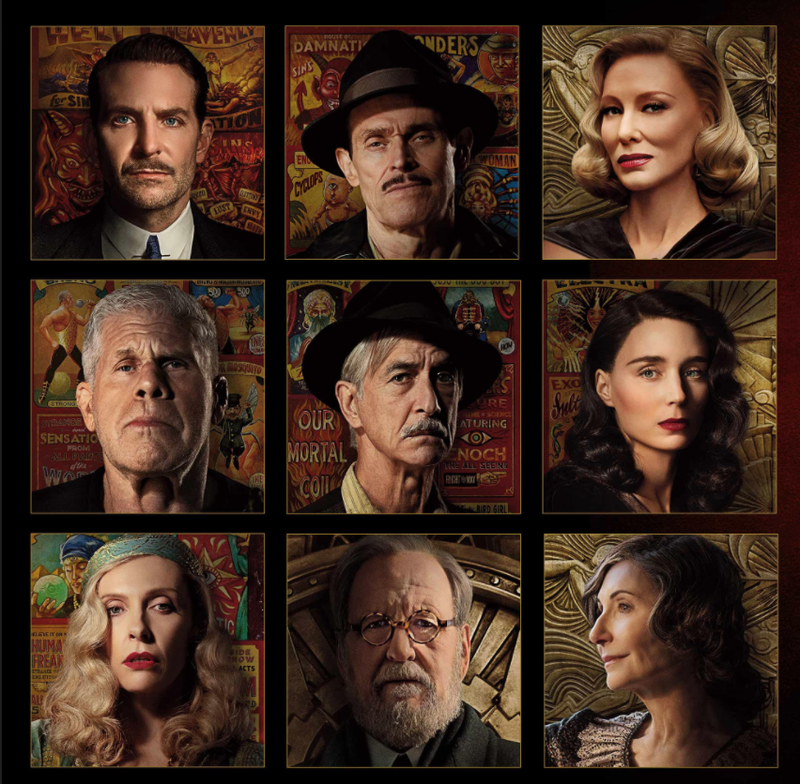 Guillermo del Toro's highly-anticipated noir thriller Nightmare Alley is on the horizon. In this updated remake of the 1947 classic, Stan Carlisle (Bradley Cooper) and his wife Molly (Rooney Mara) seek to scheme the rich and wealthy after mastering the art of mind-reading and communication with the spirit world. Spanning from his early days scrounging for money at a grimy sideshow carnival to his luxurious peak at the top of his game in the city, Nightmare Alley details the rise and downfall of the illustrious Stan Carlisle.

While he is best known for his ghoulish work in the horror genre, the noir aesthetic holds a special place in del Toro's heart. "When I started, I wanted to do just horror, fantasy, and noir. I did a noir short in the Provinces in Mexico about corrupt policemen and this and that. I was enamored, first of all, with the literature of the writing. I love James M. Cain, Donald Westlake, I love all the Black Mask and detective stories...I think like horror, it's' a genre that rips off the lid of the pretense of normalcy, and it exposes very raw moral questions. It's very much a parable genre. It always drags me that it reflects the time the movies were made in. You can see in Post-World War II genre movies...you get the anxiety of the time….These are genres that are very sensitive to what is going on in the world." 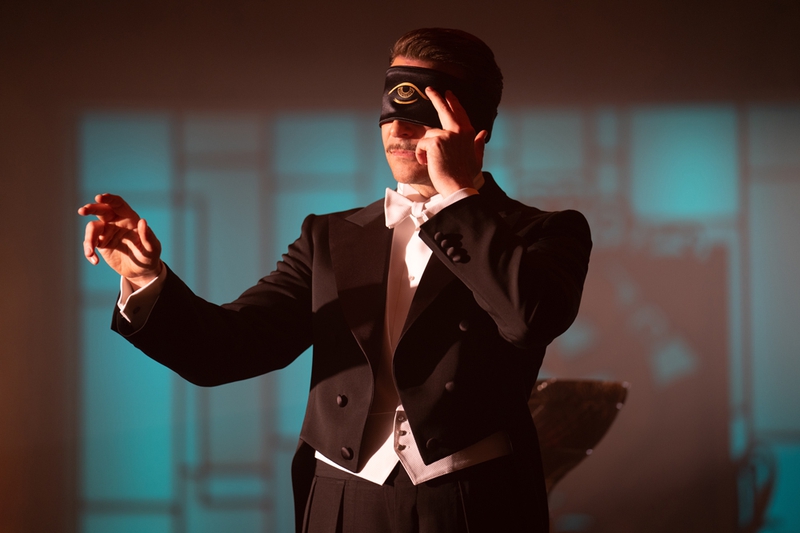 Along his harrowing journey, Carlisle stumbles upon several eclectic and sometimes mischievous individuals who aid and harm his quest for fortune. Through his brief stint working at a sideshow, Carlisle encounters Pete (David Strathairn), a drunken clairvoyant, who grants him the necessary knowledge to perfect his mind-reading act.

Pete resides in a sprawling and derelict outdoor carnival complete with makeshift stages, jarred fetuses, and a giant devil head situated on top of a funhouse. Strathairn praised the impressive set design that helped bring his character's world to life. "They built the entire thing for real. Those tents were real, the mud was real, the boardwalks were real, the little cadavers in the jars were as real as they were allowed to be. You literally were living it. The weather, the elements, all part of the experience, it was not in a studio. You were at the will of the weather. Production values are just extraordinary, just beautiful. You are in that world, and that obviously informs the actor's experience: the mud is caking on your shoes, you're lying in sand and dirt and straw and it's cold, it's rainy, it's windy, there's noise. It was just a real privilege, almost a gift of production to give a performer that kind of reality to deal with. I was just blown away when I first saw the set, the Ferris wheel. And you don't really see all of it, but it existed there in 360 degrees. There you were in the Nightmare Alley."

Spearheading the dirty shenanigans at the carnival is none other than Willem Dafoe's mischievous Clem Hoatley. Desperate to keep up the flashiness and sideshow wonders of his attraction, Hoatley navigates troublesome territory by imprisoning and maintaining a Half-Man, Half-Beast "creature." Feasting off of screeching chickens and crawling around like a violent monster, this performer (or prisoner) serves as a key source of conflict within the carnival operations. 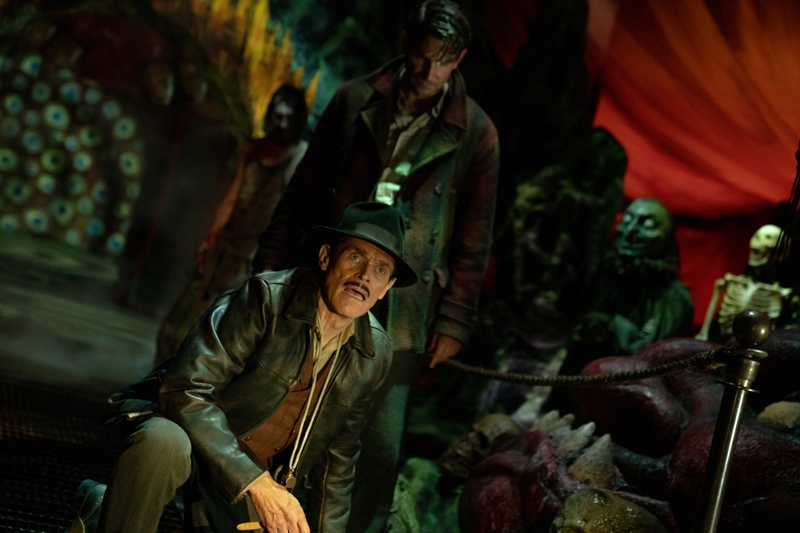 No stranger to playing morally-grey characters, Dafoe expressed his continued interest in playing these types of "villainous" individuals. "Morally good ones can be a real pain in the ass, let's face it. Villains at least have some sort of delicious taboo. We're trained all through life not to be a bad person. Well, sometimes, when we train so much to not be a bad person, you end up being a bad person. In imagining if you can play a villain, it addresses you to a different kind of orientation that can free you from certain kinds of fears. So I think to play villainous characters, ironically turns you into an angel [evil laugh.] I'm sorry, but I gotta make a joke about it. I don't want to say flat-out villains are more fun because you're talking about function in the story, and sometimes villains can be flat and they can be a device. That's not what you want. You want to play human beings, you want to play something with contradicting dimensions. Whether it's good or bad, that's really subjective. Those labels help us to tell stories. For example, people sometimes say, 'Oh, you play so many villains.' If I went through my filmography, I'd bet I would fight you to say I played many more moral good people than villains. It's just how you label things and identify certain characters."

Del Toro explained how while working alongside Morgan, the duo crafted multiple dimensions to each of these female characters in an effort to establish a compelling symmetry to the script's dynamics. "To us, it was very important to have the symmetry of three women and three fathers for Stan. These three figures each illuminate this negative space that Stan is. One of the reasons that I thought Bradley [Cooper] could pull it off is because he looks like a movie star from the '30s and the '40s. Everybody projects onto Stan. Kim said we're going to have the archetypes; the femme fatale, the go-getter humanistic character. She said I want the three [women] to survive and, in fact, thrive after Stan...The beautiful thing with Molly, every time [Rooney] would come into a scene, she landed exactly in the moment Molly was. For me, I was just in admiration. She was resisting Stan, but she was not playing that she was resisting.[The leading women would] not be punished, not be doomed with their relationship to Stan." 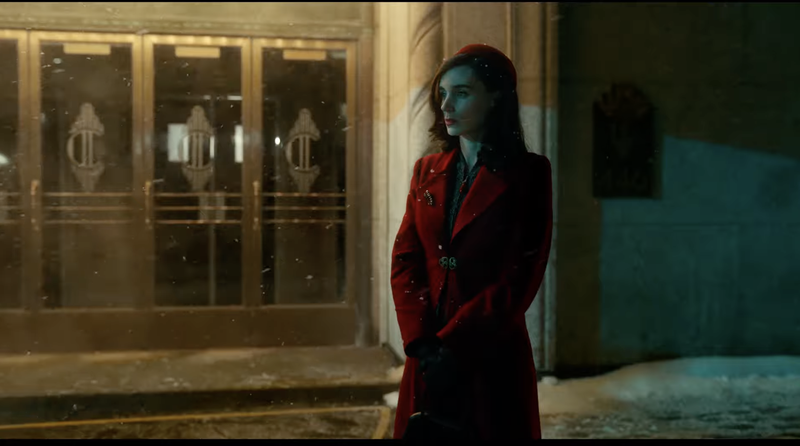 Part of the reason why Rooney's Molly felt so fully realized was because of del Toro's extensive character crafting process. Rooney gushed about the biography del Toro had written specifically for her character. "Guillermo writes these incredible character biographies. That is when it all clicked for me when I read that. There were so many little things in there that might seem meaningless to some people, but that just make a person feel real, and that to me was my real entry-point."

While pursuing bigger and better clients to benefit from as a self-proclaimed medium, Stan becomes of service to an unsettling, rich businessman with a dark past named Ezra. Richard Jenkins takes on the role of the harrowing character, nearly unrecognizable beneath a scruffy beard and rimmed glasses. Ezra desperately seeks forgiveness from his deceased wife, hoping to connect with her through Stan's otherworldly "talents."

Jenkins expressed his intrigue with the relationship between Ezra and Stan. "I always wondered, do I [as Ezra] like Stan? I realized I didn't. I needed him. I liked him when I needed him, and I didn't when I didn't. There were times when I would look at Stan and feel great empathy for him, and there were times when I would look at him and want to squish him. I never tried to choose when those moments happen, they just seem to find their way in and out." 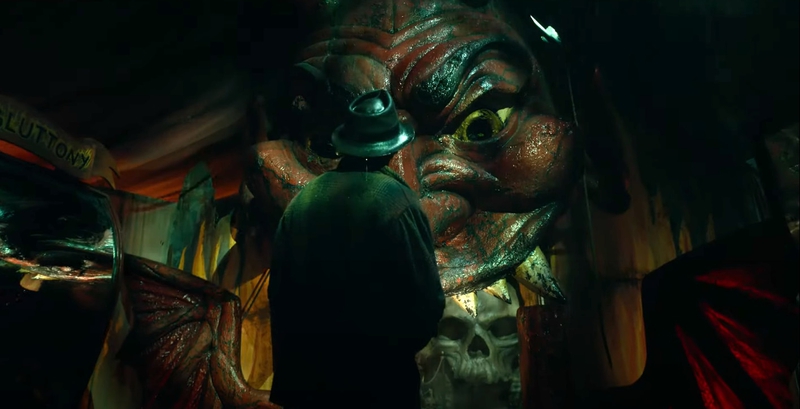 Arguably one of the most memorable elements of del Toro's work is his breathtaking visual style. Whether it's the whimsical forests of Pan's Labyrinth or the hauntingly tragic corridors of Crimson Peak's central locale, when you watch a del Toro film you know your eyes will be blessed. Nightmare Alley continues this trend with its stunning visuals that shift from the grounded, dark caverns of the sideshow carnival to the hypnotic interiors of the cityscape.

Del Toro discussed how his visual approach has evolved from film to film. "We came in [to production] with all the drawings and the paintings, everything was ciphered, the circles were going to be framing Stan the whole time, he was [going to be] seen through mirrors and reflecting this and that...blah blah blah. And once he goes to the city, everything is an alley. He abandons the color red when he leaves the carnival. The only four things in red in the city are Molly's dress, Lilith's lips, the Salvation Army, and blood. That's it! The rest is art-directed, not to have any red in it. The camera is almost never high in this movie, almost all the time [it] has the point of view of a child. It's always curious, trying to look over shoulders. I shot characters from behind a lot. The revelations came on the back of characters. I just watched [the actors] with the camera very curious trying to take a look and a new language evolved."

Nightmare Alley is only in theaters December 17, 2021.